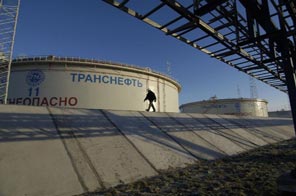 MOSCOW: Russia, which has surpassed Saudi Arabia as the world's largest oil producer, expects to top record 2009 output next year due to production from new oil fields, the deputy energy minister said Tuesday.

Sergei Kudryashov predicted 2010 production would be more than 490 million tonnes, the official output forecast for 2009: "This has been written into the budget," he was quoted by Interfax news agency as saying.

With new fields in the Arctic and eastern Siberia, Russia's oil output has shot past 2008's yearly production of 488 million tonnes. The Russian government meanwhile relies on oil exports for about 40 percent of its budget.

"Based on the results of the first nine months, you could say we've managed to buck the downward trend in oil production seen in 2008," Kudryashov said.

"Despite the financial crisis, we've managed to prevent investment in the sector from falling and retained targeted investment in certain projects."

He added that oil output might even beat forecasts by the end of this year, reaching 492 and 493 million tonnes.

Only months ago, the Kremlin suggested it would coordinate output cuts with the Organization of the Petroleum Exporting Countries in a bid to bolster the global price of crude, which collapsed from its 2008 peak.

But as its oil producers hit trouble amid the financial crisis, Russia took an aggressively different tack by easing sector taxes and encouraging producers to snatch the gap in the market opened by OPEC's cuts.

Output hit record highs of almost 10 million barrels in August. The Vankor field inaugurated then by market leader Rosneft, alone is Russia's largest new field since the Soviet collapse in 1991.

OPEC meanwhile has invited Moscow to its next summit in Angola in December, Energy Minister Sergei Shmatko Tuesday said.

"The Russian delegation has received an official invitation to participate," he was quoted by agencies RIA Novosti and Interfax as saying.

Shmatko added that Russia and OPEC plan a joint meeting ahead of the Angola summit to discuss a memorandum of understanding proposed by Moscow last year.

Russian output reached 9.9 million barrels in August and 9.86 and 9.51 in July and June respectively. In comparison, Saudi Arabia produced about 8.1 million barrels per month over the same period, according to the Russian state statistics agency.

#Russia to top record 2009 oil output next year: minister
You May Also like: