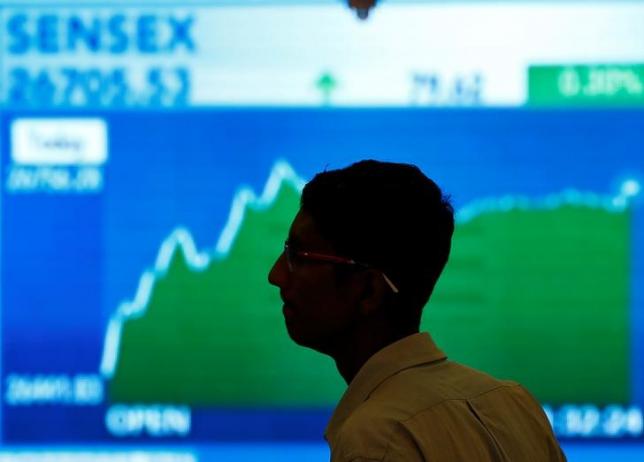 A man looks at a screen displaying news of markets update inside the Bombay Stock Exchange (BSE) building in Mumbai, India June 20, 2016. REUTERS
Sensex rose 1 percent on Friday, tracking higher Asian markets after the Bank of England launched a larger-than-expected stimulus package, though the benchmark index was headed for flat to lower for the week. Sentiment remained positive supported by the passage of India's long-awaited "game-changing" Goods and Services Tax (GST) bill on Wednesday, though gains on Thursday have been tempered by concerns about the amount of work needed to bring the reforms into reality. "The trigger of GST has now gone by and one can only judge the implications of the bill once the (tax) rates are announced, which should take two to three months," said Saurabh Jain, assistant vice president of research at SMC Global Securities. "Markets at this point are only reacting to the fact that the bill has been passed, ignoring the implications for now." Nifty rose 1.1 percent, and was headed for a 0.06 percent gain for the week. The Sensex was up 1 percent, but headed for a 0.2 percent fall for the week. Banks were among the leading gainers with ICICI Bank rising 2.8 percent and Axis Bank gaining 3.4 percent. Meanwhile, Suzlon Energy Ltd shares rose as much as 8.3 percent after its chairman said the company would exit debt restructuring by March 2017.
#England #Asian shares #sensex #Goods and Services Tax
You May Also like: