SpiceJet in talks with Boeing, Airbus for $11 billion jet deal 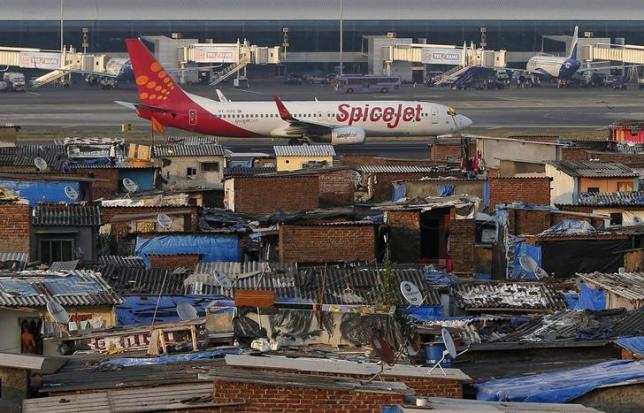 A SpiceJet passenger aircraft taxis on the runway at the airport next to a slum area in Mumbai December 19, 2014. Photo: Reuters
NEW DELHI: Budget airline SpiceJet Ltd  is in talks with Boeing Co and Airbus Group to acquire about 100 new narrow-body jets, its chief financial officer said on Wednesday, in a deal that would be worth about $11 billion at list prices. SpiceJet wants to buy more Airbus A320neo and Boeing 737 Max aircraft, Kiran Koteshwar told Reuters, as it looks to rebuild its business after almost collapsing last year. Koteshwar said the company plans to place an order, which would be its biggest ever, by the end of this financial year and would look to raise fresh equity or debt to pay for the planes once it had decided how many to buy. "We have to place an order so we have a long-term business plan in place. The focus is now on sizeable growth," he said. There is no guarantee the talks will lead to a firm order. SpiceJet's expansion plans come after India's second-largest low-cost carrier almost collapsed, before being bailed out by new chairman Ajay Singh in January. SpiceJet has less than 20 Boeing narrow-body jets, while its market share has shrunk to 12 percent in June from around 20 percent a year ago after it cut capacity to stay in business. India's airlines are expanding their fleets as they compete to win a bigger slice of what is one of world's fasting growing markets for air travel but one where most players are plagued by losses as the fight for passengers pushes ticket prices below costs. Rival IndiGo, which is profitable and the largest Indian airline by market share, has kept costs low in part by placing large orders for a single type of plane through the sale and leaseback model. Koteshwar said any new order would largely be on a sale and leaseback model, and that a big order would help it to keep future costs lower. "SpiceJet has always been constrained by the lack of long-term orders. This will give us economies of scale and for our vendors and suppliers to see that we are growing," he said. SpiceJet reported a 718.5 million rupee net profit on Tuesday for the three months ending in June, against a 1.24 billion rupee loss last year, after falling oil prices and a cost-cutting drive outweighed a slump in revenues. Its shares were up 3.2 percent at 1250 IST on Wednesday, outpacing a 0.3 percent rise in the wider market.
#Boeing #Aircraft #Airbus #Airlines companies #Aviation #SpiceJet #India aviation #IndiGo
You May Also like: