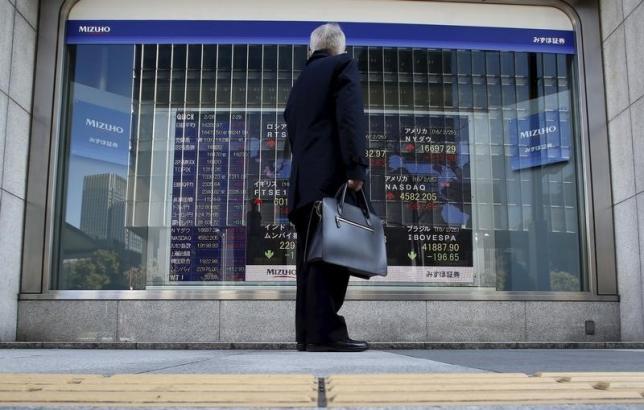 A pedestrian stands to look at an electronic board showing the stock market indices of various countries outside a brokerage in Tokyo, Japan, February 26, 2016. REUTERS
HONG KONG/TOKYO: Sterling recouped some losses after plunging to a three-decade low in early Asian trade on Friday as a break of key technical support levels triggered a wave of stop-loss selling, though the broader global market impact was limited with stocks only slightly down. The pound nosedived by almost 10 percent at one point to $1.1378 but quickly bounced. By midmorning it had steadied at around $1.2362, still down 2 percent from late US levels and leaving traders scratching their heads in the absence of any major news overnight. "This was even a bigger move than what we saw after the Brexit vote. There was almost no offer, no bids when this happened," said a trader at a European bank in Tokyo. The pound has been under renewed pressure on fears of a "hard" exit by Britain from the European Union after UK Prime Minister Theresa May set a March deadline for the formal departure process from the EU to begin. "The whole thing's been on a precipice since Sunday, since Theresa May (pointed to) March Brexit negotiations, but the selling has been very substantial so you can only think its been part of that general punishment of the pound for Brexit," said Sean Callow, senior currency strategist at Westpac in Sydney. "I think we've underestimated how many people had money positions for a very wishy-washy Brexit or even none. May's comments have really just started the cleanout and we just haven't seen any sign of bouncing." While the move broadly coincided with some news reports that Britain's exit from the eurozone may be a tough process, some traders blamed it on a possible a "fat finger" error triggering the automatic stop-loss orders. "A few stops got triggered in early trading and once cable broke 1.20, option barriers sent it lower," said Gerrard Katz, head of Asian FX sales and trading at Scotiabank said. "The broader market impact has been limited and cable should consolidate between the 1.20 and 1.25 levels." Britain's finance minister Philip Hammond tried to reassure jittery markets on Thursday, saying the UK economy was fundamentally strong, but he acknowledged that next year will be "turbulent". Elsewhere in currency markets, the dollar edged down 0.3 percent against the yen to 103.66 after hitting its highest level in a month on Thursday. The euro eased 0.2 percent to $1.1128, poised to shed 1 percent for the week. The greenback held firm after data on Thursday showed the number of Americans filing for unemployment benefits unexpectedly fell last week to near a 43-year low, boding well for Friday's closely-watched payroll data. In stocks, Asian shares dipped but held not far from the 14-month high touched last month ahead of the U.S. jobs report later in the day, with MSCI's broadest index of Asia-Pacific shares outside Japan down 0.2 percent and Japan's Nikkei falling 0.2 percent. Strong US jobs numbers could cement expectations of a Federal Reserve rate increase later this year and ripple through markets. Economists polled by Reuters forecast nonfarm payrolls to increase by 175,000. A disorderly reaction to possible U.S. interest rate hikes could disrupt capital flows and heighten asset price volatility in Asia, the International Monetary Fund said on Thursday. Interest rate futures are now pricing in about 65 percent chance of a rate hike by December, compared to less than 50 percent late last month. The 10-year US Treasuries yield hit a three-week high of 1.746 percent on Thursday before easing slightly to 1.73 percent on Friday. Gold hits 3 1/2-month low of $1,250 per ounce, having declined five percent on the week. It last stood at $1,258.8. Silver fell more than 10 percent so far this week to hit a four-month low of $17.1525 per ounce. Oil prices continued to climb, with US crude breaking through $50, spurred by an informal meeting among the world's biggest producers on output cuts and falling US crude inventories. US crude futures stood at $50.47 per barrel, just below Thursday's four-month high of $50.63.
#United States #Asian shares #Theresa May #pound
You May Also like: