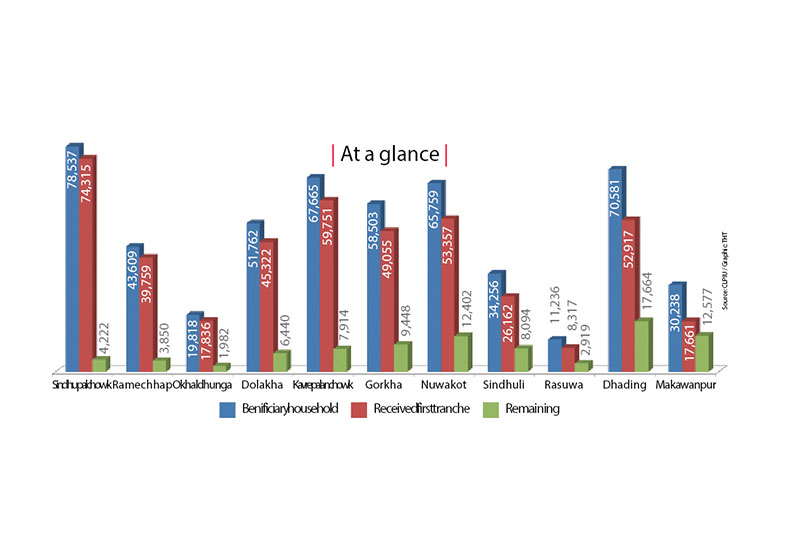 A large number of quake survivors in Dhading, Makawanpur and Nuwakot districts among the 11 severely-hit districts outside Kathmandu Valley are yet to receive the first tranche — Rs 50,000 — of the government’s grant to begin reconstruction of individual houses due to a number of procedural hurdles.

Delay in housing grant distribution in these three districts is mainly because National Reconstruction Authority (NRA) is yet to complete some procedural stipulations to mobilise donor’s fund, mismatch in beneficiary data and resettlement of quake survivor households in Budhigandaki Hydropower Project site in Dhading and Gorkha districts.

Though the NRA had started the grant distribution some nine months back, a significant number — around 25 per cent of the total 70,581 beneficiary households in Dhading district — were yet to receive the first instalment of the government’s aid as of Friday. This figure is based on the data provided by Central Level Project Implementation Unit (CLPIU) — the authorised mechanism to distribute housing reconstruction grant under the Ministry of Federal Affairs and Local Development (MoFALD).

The reason behind slow progress in Dhading is because the data of 9,000 households listed as beneficiaries did not match the data previously entered into the software of District Treasury Controller Office (DTCO). “Hence, the grant distribution has been stalled and the works of data verification is on,” informed Ganesh Raj Osti, project director at CLPIU.

DTCO deposits the money in the quake survivor’s bank account based on the grant  agreement signed between local bodies (village development committees and municipalities) submitted to the DTCO. Osti from CLPIU said he was clueless as to why there was a discrepancy in the data of beneficiary households.

On the other hand, around 1,800 quake survivor families hailing from Dhading and 1,760 from Gorkha are currently residing in the project area of the Budhigandaki Hydroelectric Project and are also yet to get the first instalment of the government’s grant. While the households are living in the area temporarily and would have to move from there eventually, the government is yet to decide where they would be relocated.

Sushil Gyewali, CEO of NRA, said that the authority  has proposed granting the survivors living in the hydro project area Rs 200,000 for temporary shelters as they are not allowed to build permanent homes there.

“The proposal needs to be approved from the prime minister-led steering committee of NRA and also from the Cabinet,” Gyewali explained.

In Nuwakot district, the government has allocated fund from the assistance being provided by the Indian government, but an agreement in this regard is yet to be inked.

“The government of India had pledged to mobilise funds for reconstruction of around 5,000 individual households in Nuwakot district, but this has been stalled as the government has not concluded the agreement till date,” said Ram Sharan Thapaliya, spokesperson for NRA. “There is also the problem of data mismatch of 3,000 households, which is being verified from the district-level Project Implementation Unit led by local development officer.”

A significant number of households has also been deprived from receiving government’s grant as they do not have land ownership certificate, which is mandatory for signing the agreement with local bodies and the government has yet to find a way out for the landless victims.

Likewise, different national and international non-governmental organisations, philanthropic organisations have pledged to rebuild 20,000 households (none less than 250 households in one cluster) from the total 531,964 beneficiaries in 11 districts outside Kathmandu Valley. “The households that receive support from other agencies will be excluded from the government’s grant facility,” said Thapaliya.

The government has announced Rs 300,000 for the quake survivors to rebuild their houses in three instalments — Rs 50,000, Rs 150,000 and Rs 100,000. Also, 25 per cent of the last instalment would need to be utilised for installation of solar energy or bio-gas. However, the Cabinet has yet to endorse the second and third tranche amount proposed by NRA.