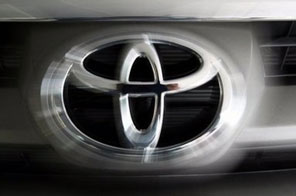 Japan's Toyota Motor Corp, the world's largest vehicle maker, is recalling another 1.09 million cars in the United States to replace floor mats that could trap accelerator pedals, the company has announced. Source: AFP

TOKYO: Toyota Motor has expanded its massive recall in the United States by more than a million vehicles to replace floor mats that could trap accelerator pedals, in a fresh blow to the Japanese manufacturer.

The latest move, which covers 1.093 million vehicles, comes on top of a recall about 4.2 million cars and trucks by Toyota that began last year.

"Toyota has decided to include certain other models in the campaign," it said in a statement posted on its website late Wednesday.

"Toyota's remedy plan is to modify or replace the accelerator pedals on the subject vehicles to address the risk of floor mat entrapment, even when an older-design all weather floor mat or other inappropriate mat is improperly attached, or is placed on top of another floor mat," it said.

The company said that in rare cases, the pedal mechanism could become worn and harder to depress or stuck in a partially depressed position. Toyota said Monday the recall might spread to Europe.

Toyota shares fell 1.75 percent in morning trade to 3,640 yen, after a drop of 4.26 percent on Wednesday in response to the group's decision to suspend sales in United States of eight models due to the safety concerns.

Toyota ended General Motors' 77-year reign as the world's largest auto maker in 2008 but the road has been a bumpy one for the Japanese giant, long lauded for its vehicles' safety and reliability.

The company expanded rapidly over the past decade to meet strong demand, prompting critics to question whether the company might have sacrificed its legendary quality in its quest to become the global number one.

#Toyota expands massive recall by million vehicles
You May Also like: