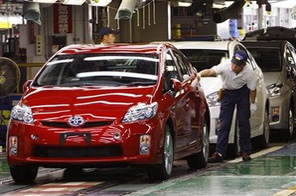 In this photo taken on June 5, 2009, a Toyota Motor Corp. worker gives the final examination on an newly assembled Prius at Toyota Tsutsumi Plant in Toyota, central Japan. Source: AP

TOKYO: Toyota Motor Corp. got 180,000 orders for the new Prius hybrid in Japan in just a month, far surpassing its target of 10,000 vehicles in monthly sales, the automaker said Friday.
The third-generation Prius, which rolled out a month ago, has been a big hit here, partly because of tax-breaks and other new government incentives that are meant to perk growth during the nation's downturn.
The Prius was the No. 1 selling vehicle in Japan for May, clinching the top spot in the domestic market for the first time and overtaking Honda's new hybrid, the Insight, which fell to third after taking the top spot in April.
Competition in the hybrid vehicle market has intensified after the Insight debuted in February in Japan at 1.89 million yen ($19,700). Toyota is offering its new Prius at just over 2 million yen ($20,900), about 300,000 yen ($3,100) cheaper than the previous model. The upgrade has a larger 1.8-liter engine but gets better mileage than the older one.
The new Prius is just starting to arrive in the U.S., where sales for last month totaled just 700. Dealers are still selling mostly the second-generation Prius, making for total Prius sales of 10,091 for May, Toyota spokesman Paul Nolasco said.
Strong hybrid sales are a rare bright spot for Japan's automakers, which have been battered by the global slowdown, a strengthening yen and the U.S. credit crunch.
Toyota, the world's biggest automaker, which also makes the Camry sedan and Lexus luxury models, recorded its worst loss in its seven-decade history for the fiscal year ended March.
In Japan, hybrids are now tax-free, delivering savings of about 150,000 yen ($1,500) for a Prius buyer. Other fuel-efficient models qualify for lower savings.
Also helping is a "cash-for-clunkers" program similar to the plan initiated by President Barack Obama, which offers vouchers worth up to $4,500 for a gas-guzzler turned in for a new car in the U.S.
In Japan, people who trade in a car 13 years or older get a 250,000 yen ($2,500) rebate for buying an ecological model. Those without a trade-in get 100,000 yen ($1,000).
Toyota is also continuing to sell the old-style Prius in Japan at the same price as the Insight. That's relatively unusual as manufacturing of old models is usually discontinued with the arrival of the new model. Those sales numbers aren't included in Friday's orders number from Toyota.
But while hybrid sales are booming, demand for other models is plunging.
The overall auto market continues to sag in Japan. Vehicle sales in Japan fell for the 10th straight month in May, dropping 19.4 percent from the same month the previous year, according to the Japan Automobile Dealers' Association.
The decline has been easing from previous months as sales fell 29 percent in April and 31.5 percent in March. Toyota's vehicle sales in Japan tumbled 24 percent in May from the same month a year ago.