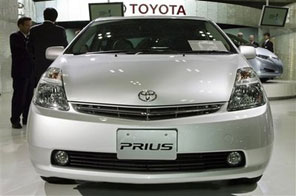 FILE - In this Oct. 19, 2005, file photo a Toyota Prius hybrid compact car is exhibited at the Tokyo Motor Show in Makuhari, east of Tokyo. Toyota is slashing managers' bonus pay 20 percent as the Japanese automaker tackles a massive recall in the U.S. and deep losses for the second fiscal year straight. Source: AP

TOKYO: Toyota is slashing bonus pay for managers as the Japanese automaker tackles a massive recall in the U.S. and deep losses for the second straight fiscal year.

Japanese workers at major companies such as Toyota get twice-a-year bonus pay in addition to their monthly salaries which reflects the company's performance.

Toyota announced in the U.S. on Wednesday a massive recall affecting 4 million vehicles to replace the gas pedals that can get stuck in the floor mats and cause sudden acceleration.

The recall, Toyota's largest ever in the U.S., comes at a time when the maker of the Prius hybrid and Lexus luxury car is trying to reverse losses caused by a global slump and strengthening yen.

Earlier this month, Toyota lowered its loss forecast for the fiscal year through March 2010 to 200 billion yen ($2.2 billion) from its initial projection for a 450 billion yen ($5 billion) loss.

The world's biggest automaker had just managed to crawl back into the black for the July-September quarter following three straight quarters of red ink as government stimulus measures helped boost global sales of green vehicles.

Toyota's top executives and board have already given up their bonus pay.

The cuts for managers follow a 60 percent year-on-year decline for their summer bonus this year, and a 10 percent cut for their winter bonus in 2008.

The bonuses for union workers have also been cut. Their winter bonus will average 930,000 yen ($10,700) this year, down 18 percent from the previous year, according to Toyota.

The cost of the U.S. recall is expected to be significant because of the sheer number of vehicles.

The Nikkei, Japan's biggest business newspaper, said the recall cost, although reaching tens of billions of yen (hundreds of millions of dollars) won't change Toyota's annual earnings forecast because the company earmarks money for such measures.

Toyota declined comment on the costs or the forecasts.

#Toyota slashes bonuses for managers by 20 percent
You May Also like: