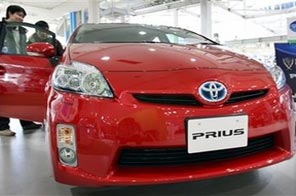 Visitors look at Toyota Motor Corp.'s Prius on display at the automaker's showroom in Tokyo, Friday, Jan. 8, 2010. The Japan Automobile Dealers Association said Friday that the Prius, a gas-electric hybrid, was No. 1 in its ranking of sales by vehicle models - with 208,876 Prius cars sold in 2009, nearly three times the numbers sold the previous year. Source: AP

TOKYO: The Toyota Prius was the top-selling car in Japan last year — the first time a gas-electric hybrid has clinched that spot.
The Japan Automobile Dealers Association said Friday that Toyota Motor Corp.'s Prius was No. 1 in its ranking of sales by vehicle models — with 208,876 Prius cars sold in 2009, nearly three times the numbers sold the previous year.
The big success of the Prius in the home market for Toyota, the world's biggest automaker, highlights the growing consumer acceptance of green vehicles.
Hybrid sales already make up about 10 percent of new vehicle sales in Japan.
That's huge compared to other global markets, where hybrids are eye-catching but remain a relatively niche product. Green Car Congress, which researches and compiles reports on green technology, said hybrids have a 2.8 percent share of new vehicle sales in the U.S.
But car owners around the world may be about to embrace not only hybrids but also plug-in hybrids and electric vehicles, which are even greener than the Prius.
The competition in green autos is expected to heighten as new models from other automakers are expected in 2010, including the Chevrolet Volt electric vehicle from General Motors Co.
So far, the Prius reigns supreme in Japan.
It easily outsold the No. 2 hybrid, the Honda Insight, at 93,283 for the year, and ranking fifth in overall Japan sales.
Coming in second for overall car sales was Honda Motor Co.'s Fit, followed by the Toyota Vitz. Both aren't hybrids but are small and fuel efficient models.
Green models have gotten a huge lift this year in Japan from a government cash-for-clunkers program and tax breaks, aimed at boosting sales during a global slowdown that has seriously hurt Japanese automakers.
The Prius was the top-selling model for every month from May last year — the month when an upgraded version hit showrooms. It is so popular buyers must wait weeks to get their Prius. Demand for the Prius has also been strong in the U.S.
"The numbers speak for themselves," said Toyota spokesman Paul Nolasco in Tokyo. "The Prius represents the ideal package people in Japan are looking for in terms of environmental and driving performance."
The Prius, now in its third generation since its 1997 introduction, is the best-selling gas-electric hybrid in the world, racking up a cumulative 1.6 million units sold so far, according to Toyota.
The new Prius gets a combined 50 miles per gallon, compared with 46 mpg for the 2009 model, according to Toyota.
It does even better under Japanese government testing standards, at 38 kilometers per liter, which converts to 90 miles per gallon.
Hybrids, by going back and forth between a gasoline engine and electric motor, tend to offer better mileage in slow-speed and stop-and-go driving common on Japanese streets, rather than on highways — just the reverse of conventional cars.
In an effort to ride out the competition of rivals, Toyota has also kept prices down on the Prius — starting at $22,000, unchanged from the base price for the 2009 model, and a more basic U.S. model starting at $21,000. In Japan, the Prius starts at 2.05 million yen, or about $22,000.
Japan's auto market has been stagnant for decades, and the perk from hybrid sales is a bright spot amid overall dismal demand.
Auto sales in Japan declined to their lowest level in 38 years last year, slumping 9 percent to 2.9 million vehicles, and falling below 3 million units for the first time since 1971, according to the association earlier this week.
Japanese automakers are looking to emerging markets such as China, India and Southeast Asia to keep demand going as prospects for growth are also weak in the U.S. and Europe.

#Toyota's Prius top-selling car in Japan last year
You May Also like: