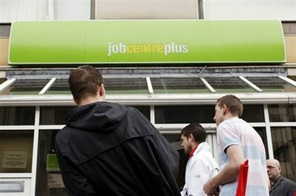 Job seekers outside the Job Centre in Chatham, in the southeastern county of Kent. Source: AFP

LONDON: The unemployment rate hit 7.2 percent in the three months to April, the highest level in 12 years, official data showed on Wednesday.

The number of people claiming jobless benefits jumped to 2.26 million, the data showed, as the country struggles through the worst recession in decades.

The Office of National Statistics said the number of people claiming benefits rose by 39,000 in May, but less than the 60,000 which had been forecast by analysts.

"The unemployment rate was 7.2 per cent for the three months to April 2009, up 0.7 over the previous quarter and up 1.9 over the year," the office said in a statement.

#UK jobless rate hits 12-year high
You May Also like: