World stock markets mixed ahead of US earnings 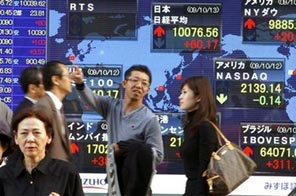 Shares in resource companies were stronger after commodity prices rose, with oil nearing $74 a barrel, while the dollar ticked up against the yen. In China, stocks received a boost after the government's sovereign wealth fund bought shares in major banks.

As investors awaited third-quarter results in the U.S., where chipmaker Intel and consumer products company Johnson & Johnson are due to report Tuesday, more signs of economic improvement elsewhere in the world helped gird markets in Asia.

In Europe, benchmarks in Britain, Germany and France were lower by about 0.3 percent in early trade. Stock futures pointed to modest losses Tuesday on Wall Street. Dow futures were down 10, or 0.1 percent, at 9,809.

Gains across Asia marked a recovery after most markets slid on Monday.

Shanghai's benchmark was up 1.4 percent, Australia's index gained 1 percent and Indonesia's market was higher by 0.3 percent.

Also helping sentiment was a modest advance on Wall Street that pushed the Dow Jones index to a new trading high for 2009.

#World stock markets mixed ahead of US earnings
You May Also like: