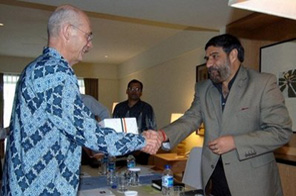 PARIS: World Trade Organization head Pascal Lamy said on Friday he saw no "positive sign" for world trade which has been battered by the global economic crisis.

"I do not share the optimism" of some governments for an economic recovery, "because from the point of view of international trade, I do not see any positive sign at the moment," Lamy said during a debate here.

He reiterated the WTO's forecast of a nine-percent drop in world trade this year, "unprecedented since the last world war."

"There is nothing to say that we are not still deep in this crisis which has begun and will continue," he said, warning that developing countries in particular would face "social consequences."

The World Bank said Thursday the global economy was set to contract some 3.0 percent this year, sharper than previously estimated, urging more aid for developing countries.

#WTO chief: No positive signs for world trade
You May Also like: