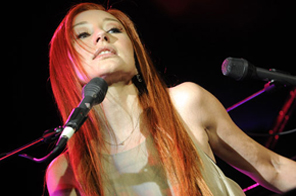 LONDON:Tori Amos has warned chatty music fans not to sit in the front row at her gigs - because she'll have concertgoers removed from shows if she can hear them.
The Cornflake Girl singer admits she cannot stand inconsiderate people who hold cellphone conversations through her ballads, and a recent mid-show rage will become commonplace if fans don't shut up.
She tells Spin magazine, "There were some girls who were given front row seats as a courtesy and they were incredibly rude. One was on the phone - and even I could hear her - I mean, it was during a ballad.

#Amos annoyed by chatting concertgoer
You May Also like: