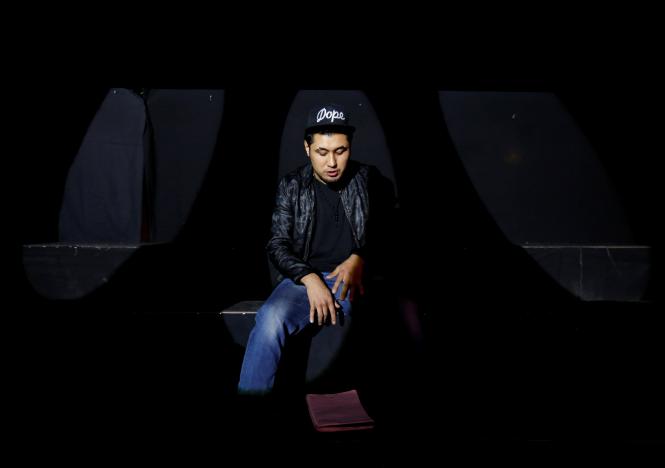 Sayed Jamal Mubarez 23, a singer finalist of the music contest 'Afghan Star', practices during a rehearsal for the show in Kabul, Afghanistan March 19, 2017. REUTERS/Mohammad Ismail

KABUL: A barber-turned-rapper has been crowned the winner of an Afghan talent show that offered its audience some relief from daily stories of insurgents and suicide bombs.

Sayed Jamal Mubarez, from Afghanistan's long-marginalized Hazara ethnic minority, won viewers over with lyrics capturing both the hope and despair of young people living through a war against Taliban militants now in its sixteenth year.

"Afghan Star", modeled on singing contests popular across the world, is in its 12th season on Afghanistan's biggest private television network Tolo.

This year's edition stood out after a female - 18-year old singer Zulala Hashimi from the deeply conservative east of the country - reached the final for the first time, defying widespread attitudes against women performers.

But Mubarez emerged the winner later on Tuesday, looking every bit the budding rapper with his tilted red baseball cap and razor-trimmed beard.

"I am so happy...I would have been happy if Zulala had won it because in Afghanistan women are living in a restricted situation," the 23-year old said after accepting his award at a television studio housed behind wire-topped blast walls in Kabul's diplomatic enclave.

The sole breadwinner at his home in the northern city of Mazar-i-Sharif, Mubarez said he discovered rap in Iran and spits lyrics while cutting hair.

The contest has been held inside a fortified compound for the last two series after the Taliban last year killed seven Tolo employees in a suicide attack on a staff minibus.

Newer musicians can struggle to make it big in Afghanistan, where the Taliban once banned music and many disapprove of Western-style popular culture, and artists often seek the safety and freedom of a life abroad.

Mubarez told Reuters he intends to turn professional if he can find financial support, and would otherwise return to his barber shop while rapping on the side.