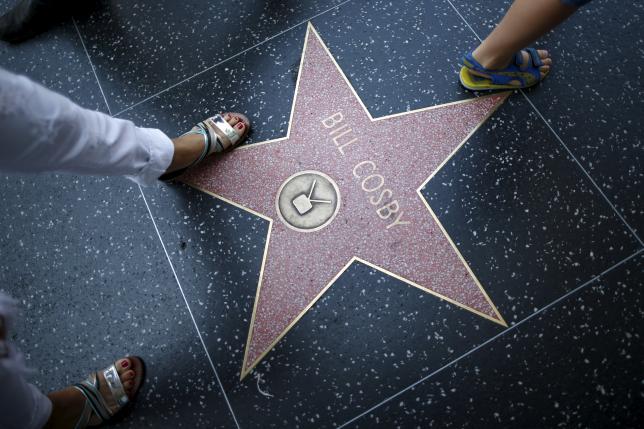 People walk over Bill Cosby's star of the Hollywood Walk of Fame in Los Angeles, California, United States July 9, 2015. REUTERS
Comedian Bill Cosby filed legal papers on Tuesday calling for court sanctions against a woman accusing him of sexual assault, saying she breached their confidentiality agreement in the leak of his full deposition from a 10-year-old civil case to the New York Times. Cosby, 78, made the filing in US District Court in Philadelphia in opposition to recent motions by Andrea Constand, a former Temple University employee who has alleged the comedian tricked her into taking drugs before he sexually assaulted her. The lawsuit she brought against Cosby was settled for an undisclosed sum in 2006, and all documents from the litigation were sealed until a federal judge on July 6 released limited redacted excerpts from Cosby's 2005 deposition testimony in the case. Those excerpts included Cosby's admission under oath that he had obtained Quaaludes, the brand name for a sedative widely abused as a recreational drug in the 1970s, with the intent of giving the pills to young women in order to have sex with them. On July 8, Constand filed papers in court seeking to unseal the entire deposition and her settlement agreement with Cosby, as well as to free her from any confidentiality restrictions. The New York Times has since obtained its own record of Cosby's deposition and posted additional excerpts on its website, revealing testimony in which the entertainer described how he had pursued women and how he obtained Quaaludes. Cosby's own court filing on Tuesday stressed that the deposition excerpts so far unsealed by the judge contain no testimony that he engaged in any non-consensual sex or gave anyone Quaaludes without their knowledge or consent. "Reading the media accounts, one would conclude that Defendant has admitted to rape," the document said. "And yet Defendant admitted to nothing more than being one of the many people who introduced Quaaludes into their consensual sex life in the 1970s." The memorandum goes on to call Constand's request to open the entire Cosby settlement to public scrutiny an "obvious attempt to smear" the performer and says she should be sanctioned for leaking the nearly 1,000-page deposition transcript to the New York Times through her "own hired court reporter." More than 40 women have come forward in the past year alleging Cosby drugged and sexually assaulted them in incidents dating back decades. He faces at least four civil lawsuits stemming from such allegations. Cosby has never been criminally charged. His attorneys have consistently denied the accusations, which have left in tatters the career and public image of a once-revered entertainer best known for playing the lovable father figure Dr. Cliff Huxtable on the hit TV comedy series "The Cosby Show" in the 1980s and '90s. Cosby has said little in public about the scandal, telling ABC television in May that he did not wish to discuss allegations.
#Bill Cosby #court sanctions #deposition leak
You May Also like: