Cyrus gets steamy in new film 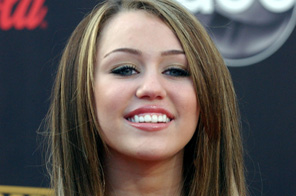 Disney star Miley Cyrus got steamy with her co-star while shooting for her new film The Last Song. Source: Agencies

HOLLYWOOD: The Hanna Montana actress, who co-stars with Liam Hemsworth, locked lips with the young Aussie actor in sexy scenes for the film.

Miley plays a wild child who is packed off to live with her estranged father in the upcoming movie. And it seems that the 16-year-old enjoyed her seaside smooching scenes.

According to Us magazine, while writing on her Twitter page MIley said, "I got a hot boy. Not bad to look at for the summer."

"I am not dating Liam! We have a kissing scene on the beach today :) I’m just working :) not a bad job huh?" she added.

#Cyrus gets steamy in new film
You May Also like: