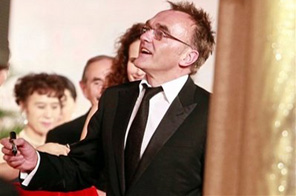 SHANGHAI: The Danish-Swedish drama "Original" won best picture at the 12th Shanghai International Film Festival, with its male lead Sverrir Gudnason named best actor for playing the soul-searching son of a mentally ill mother.
Reading from the citation, jury president "Slumdog Millionaire" director Danny Boyle called the debut feature film of Antonio Tublen and Alexander Brondsted "a light, touching and subversive study of mental illness that is both compassionate and never sentimental."
Accepting his trophy, Gudnason, who plays a character who tries to stop pleasing others, yelled in delight and said, "This is the best thing that anyone has ever given to me and it's going to keep me going on."
The jury said "this young actor's brilliant, sensitive, and humorous performance is absolutely mesmerizing."
Simone Tang was named best actress for another Danish film, "Aching Hearts," about the relationship of two high school sweethearts. Presenting the award during Sunday's ceremony, another juror, veteran American actress Andie MacDowell said, "It was a beautiful performance." The jury citation praised Tang for "control and clarity of complex emotions."
A tearful Tang said making the movie, which was shot over three years, "was really the best experience of my life so far."
Julius Sevcik was named best director for the Czech film "Normal," the study of a serial killer in the 1930s.
"This is a big honor especially because of the directors who are on the jury," Sevcik said.
The jury grand prix went to the Tibet-set film "The Search," about a director who is drawn into the search for a missing man when he auditions actors for his new movie. The jury prize went to the China-Hong Kong-Taiwan co-production "Empire of Silver," the story of the scion of a banking empire in 19th century China.
The organizers also presented lifetime achievement awards to American music legend Quincy Jones and veteran French actress Isabelle Huppert. Both artists addressed the audience in rudimentary Chinese, with Jones playfully saying "wo de piao liang bao bei" — "all my beautiful children."
The 76-year-old composer, whose career encompasses jazz, film scores and pop music, also revealed on stage that he had accepted an invitation from Chinese composer Tan Dun to help write the theme song for the Shanghai Expo in 2010.
"I'm very, very proud of that. I intend to come back and back and back," Jones said.
He also praised the intellectual curiosity of the university students he met in China, saying, calling them "the most unbelievable kids I've ever met."
The Italian film "We Can Do That," about a former businessman who manages a work cooperative staffed by mental patients, won best screenplay. France's "Nowhere Promised Land" clinched best cinematography and the South Korean drama "Rough Cut" was honored for the best music score.

#Danish-Swedish drama best film at Shanghai
You May Also like: