Deepika fears getting addicted to smoke 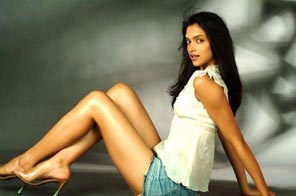 MUMBAI: Deepika Padukone went white with fear when she came to know that she has to smoke continues for her role in the film 'Karthik calling Karthik'. The actress who never smoked in real life feared that the role would sure get her addicted to cigarettes.

In 'karthik calling Karthik' Deepika is playing a very modern girl who is continuously on smoke, Farhan, who is the playing the lead against the actress, advises her against it and eventually succeeds in getting her quit smoking.

But the actress was very nervous playing the role as she thought that the role will for sure make her get addicted to smoke. However, Sidhwani ordered for nicotine-free cigarettes for the actress. The organic cigarettes enventually made the actress go for role without getting tensed.

Taking about the issue, sidhwani said that The film is about a lovable loser and a modern, hip girl who used to smoke continuously. The boy helps the girl quit smoking at last thus giving a nice massge in the end of the film.

Sidhwani didn't want the actress to get indulge in bad habit while playing the role and thus ordered for organic cigarettes.

#Deepika fears getting addicted to smoke
You May Also like: