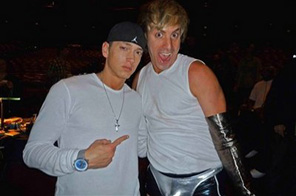 In this image released by RapRadar.com, Eminem, left, and Sacha Baron Cohen, dressed as the character Bruno, pose together on Saturday, May 30, 2009, the day before the MTV Music Awards in California. Enimem told RapRadar.com that the much-talked about stunt, which had the comedian descending from the ceiling from a wire in a scantily clad outfit and landing buttocks up in Eninem's face, was all rehearsed, right down to Eminem's mock disgust. Source: AP

NEW YORK: Eminem says he knew full well what he was about to face at the MTV Movie Awards — including Sacha Baron Cohen's bare butt.

Enimem told the Web site RapRadar.com that the much-talked about stunt was all rehearsed, right down to Eminem's mock disgust. Says the rapper: "I'm thrilled that we pulled this off better than we rehearsed it."

Eminem says when he left the show, he went back to his hotel and laughed for three hours, including as he watched the playback.

The rapper calls himself a "big fan" of Baron Cohen, who he said approached him about the gag while he was in Europe.

At Sunday's live show, the comedian descended from the ceiling on a wire in a fake mishap that ended with his bare hindquarters in Eminem's face.

#Eminem laughed for 3 hours after MTV stunt
You May Also like: