Film academy reveals which 4 Oscars will be given off air 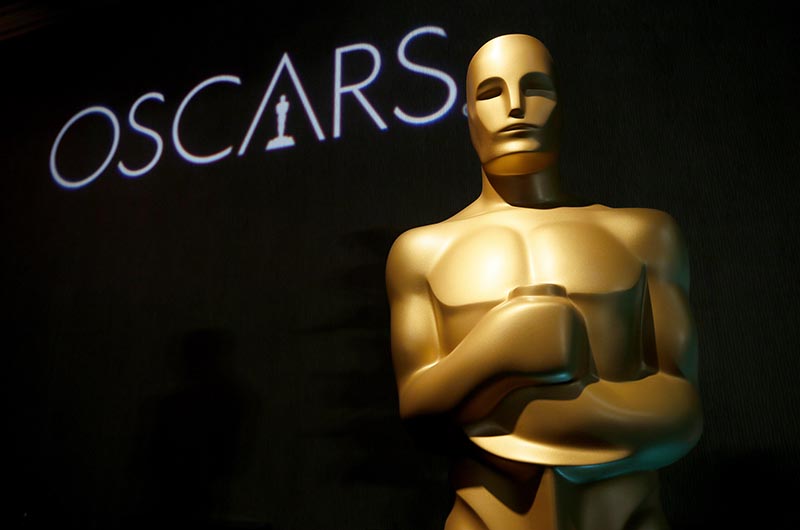 An Oscar statue appears at the 91st Academy Awards Nominees Luncheon in Beverly Hills, California, on February 4, 2019. Photo: Reuters
LOS ANGELES: The film academy has finally revealed the Oscar categories that will be presented during the commercial breaks of this year’s broadcast in an attempt to shorten the show to three hours. The Oscars for cinematography, film editing, makeup and hairstyling and live-action short will be presented off-air at this year’s ceremony, an Academy of Motion Picture Arts and Sciences spokesperson said Monday. The winning speeches will air later in the broadcast and will also be live-streamed on Oscar.com and the film academy’s social accounts. Film academy president John Bailey said in a note to members that the executive committees of six branches opted-in to this “slightly edited timeframe” and the board of governors chose four for this year. “We are committed to presenting a show which we all will be proud of,” Bailey said. In future years, four to six rotating categories could be cut from the broadcast. The plan to hand out certain awards during commercials to achieve a three-hour runtime on February 24 was announced in August as one of a few changes to combat declining ratings. But unlike the popular Oscar category, which was walked back for further consideration after impassioned backlash, this one stuck. The move has been generally disliked by both nominees and many film fans on social media, some of whom have been tweeting with the hashtag #PresentAll24 for weeks. “This decision has nothing to do with any decision about cinema It’s a broadcast thing decision. It’s about the show, the entertainment. But it should not be part of the discussion of what Academy Awards are about,” said “Roma” director and cinematographer Alfonso Cuaron at the Directors Guild Awards earlier this month. “The  Academy Awards should be about celebrating the artists in the different categories.” Curaon is the only nominee in a cut category who is up for other awards, including best director and best picture. Those will be presented during the broadcast. “Vice” director Adam McKay said earlier that he was “bummed” by the idea. He had heard whispers that makeup and hairstyling was going to be one of the unlucky categories, which he considered a particular blow for the people who worked so hard to transform Christian Bale into Dick Cheney for his film. “That crew worked so hard,” McKay said. “Vice” is also up for an editing award, which will be presented off air as well. Last week at the Nominees Luncheon, “Bohemian Rhapsody” editor John Ottman called the change insulting. His ended up being in one of the cut categories as well. “Bohemian Rhapsody” sound mixer Paul Massey just worried that he wouldn’t know what to tell friends and family who wanted to watch the show to possibly see him win. Although he offered one suggestion to ensure a swift show: Seat the below-the-line nominees closer to the stage. For some, it’s a long walk up to the podium and show producers have promised that everyone gets only 90 seconds from the time their name is called to get up and say your thanks before the orchestra starts playing.
#Hollywood #make-up #Awards #movies #Oscars #Vice #Academy Awards #Bohemian Rhapsody #Editing
You May Also like: