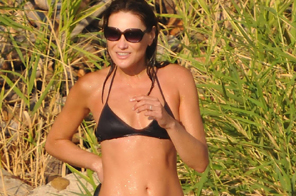 PARIS: French pop star Benjamin Biolay is suing TV bosses in his native country for allegedly linking him to a scandal involving France's First Lady Carla Bruni.
The model/singer's relationship with her husband, French president Nicolas Sarkozy, was thrust into the spotlight last month (Mar10) as gossip spread over allegations that both the politician and his wife had been involved in extra-marital affairs.
Bruni recently denied the story and dismissed the rumours as "insignificant" and "unpleasant".
And now singer Biolay is taking legal action, alleging a report aired on publicly-funded French TV network France 24 linked him to the scandal.
He has filed legal papers accusing chiefs at the company of violating his right to privacy, and he is demanding $26,843 (£17,493) in damages.
Biolay's lawyer, Isabelle Wekstein, tells the AFP, "Alluding to this hypothetical love affair was clearly a violation of Benjamin Biolay's private life. Mr Benjamin Biolay is opposed to any disclosure about his private life. (The rumours) were inaccurate".

#French singer sues over Bruni affair rumours
You May Also like: