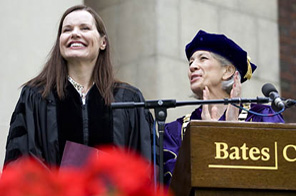 LEWISTON: Actress Geena Davis says it's critical that young people see more women in movies and TV.
Addressing Bates College graduates in Lewiston, Maine, Davis says that "society can only benefit if women are at the table," according to the Sun-Journal newspaper.
The founder of the Geena Davis Institute on Gender in Media told the graduates on Sunday that studies show kids are seeing "a very unbalanced world," with three male characters for every one female.
The "Thelma and Louise" star was one of five speakers at Bates' commencement ceremony. She won an Oscar for best supporting actress in the 1988 movie, "The Accidental Tourist."

#Geena Davis calls for more womenâ€™s roles
You May Also like: