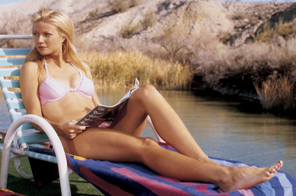 The 37-year-old actress - who has five-year-old daughter Apple and four-year-old son Moses with Coldplay frontman Chris Martin - is convinced people think her life is too perfect, but she tries not to worry about it.

She said: "Look, just the mere fact that I like my guy and we have these two healthy children, and they were easy to conceive, that's already, 'Who the f**k do you think you are?'

"On a good day, I see it like that, anyway. Like, there's always a price to pay right?"

Despite her strong bond with her husband, Gwyneth admits they have different tastes, and their disagreements are often food related.

She explained to Britain's Vogue magazine: "Chris is terrible. The s***tier, the cheaper, the better and I think he's transferred it to Moses. When I try to give my husband a piece of Green and Blacks chocolate he's like, 'Get that stuff away from me.' "

Despite loving quality time with her family, the 'Iron Man' star couldn't give up working, but finds it hard to get her balance right.

She said: "Oh, I'll never be able to give up movies. It's just, does it really make me happy to do them all the time? Do I want to be 37 and be alone in a hotel room ordering room service, getting to know another group of people? Well, y'know, no."