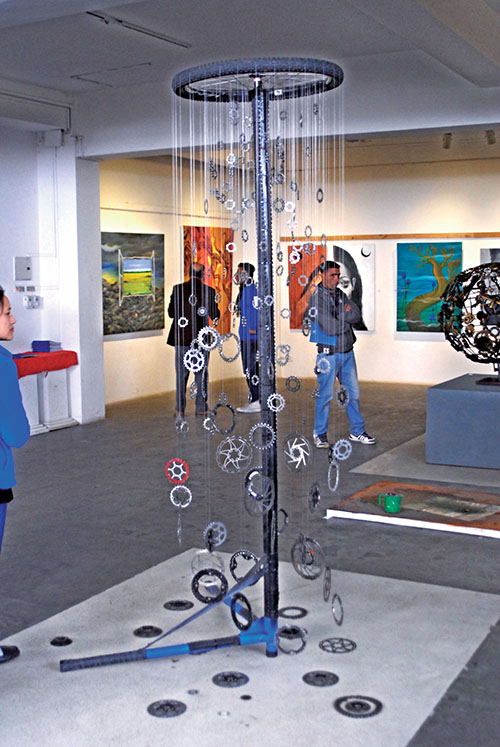 KATHMANDU: The group exhibition ‘Intuition’ featuring prints, paintings and installations began on March 2 at Nepal Art Council, Babermahal. Eighteen artists, who are also students of MFA IVth Semester at Central Department of Fine Arts, Tribhuvan University, have created 80 artworks that are on display. These artists have expressed their thoughts about their surroundings and they have expressed their impressions in a beautiful way. Bikku Kumar Thapa in ‘Insanity’, using mixed media has showcased the degradation of humanity in the name of urbanisation. There are skyscrapers, towers and other structures on the top part of the canvas while at the bottom of the canvas animals and birds are shown in their pathetic condition — on the verge of death — trapped in the garbage and trash that humans have created. Then a frame is hanging on the canvas that features a portrait of a extremely happy man, who is laughing. Along with Thapa, Jenny Ghale, Sudesha Shrestha, Ritu Thapa, Laxmi Magar, Bikash Shrestha among others have also shown their concerns towards the urban lifestyle. Ghale has reflected the negative effect of urbanisation on humans. In one of her prints, using brown and white hues she has created a man selling pani-puri — the air is polluted in that area and the man is using oxygen cylinder and mask to breathe, Time, emotion, motion, nature, individuality are some other themes used by the artists. Bhufan Limbu has captured the motion or movement in his painting ‘The Spinning Ribbon’. A man and a woman are seen dancing using a ribbon. He has used red and white curvy lines to form the shapes of man and woman in a black backdrop where they are using a blue ribbon while dancing. Whether it is installation, painting or print almost all artists have showcased a strong sense of maturity while dealing with the subject matter or the medium. The exhibition with insightful expression of young artists continues till March 6.