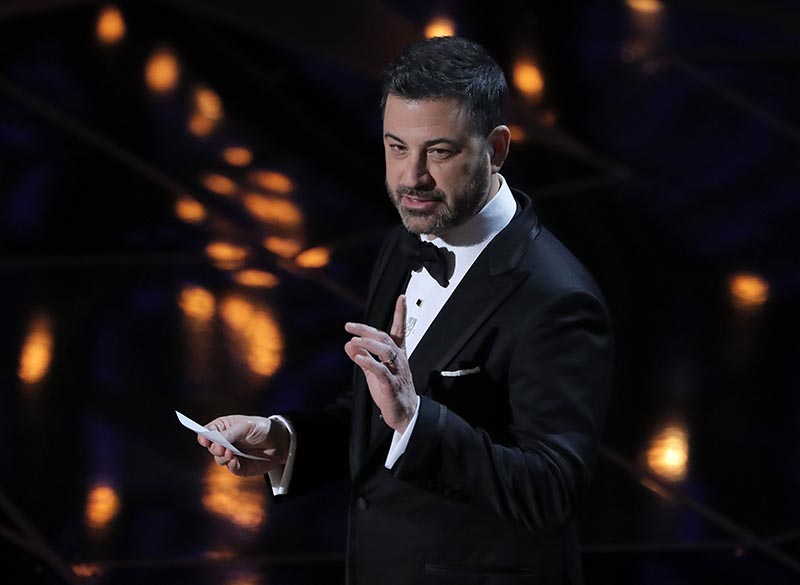 90th Academy Awards Host Jimmy Kimmel at Oscars Show in Hollywood, California, US, on March 5, 2018. Photo: Reuters
Opening the show before an A-list audience of scores of actors and filmmakers, many of whom have said they are victims of sexual harassment, Kimmel pulled no punches about the elephant in the room. Noting that it was the 90th year of the ceremony, Kimmel said the tall golden Oscar statue itself was "the most beloved and respected man in Hollywood." "He keeps his hands where you can see them, he never says a rude word and most importantly he has no penis at all. He is literally a statue of limitations. That's the kind of man we need more of," Kimmel quipped. The sexual misconduct scandal has led to dozens of actors, filmmakers and agents being fired or forced to stand down since October 2017, and has overshadowed the movie industry's annual awards season celebrations. Referring to Fox Searchlight's 13-time Oscar-nominated fantasy romance "The Shape of Water," in which a cleaning lady falls in love with a mysterious river creature, Kimmel joked: "We will always remember this year as the year men screwed up so badly that women started dating fish." The scandal was also a topic on the red carpet, and the Time's Up campaign against sexual harassment in the wider workplace is expected to be recognized in some form during Sunday's ceremony. Actress Salma Hayek, one of more than 70 women who have accused film producer Harvey Weinstein of sexual impropriety, said on the red carpet that she was happy to "celebrate the fact that women will not have to struggle as hard together" "I know that future generations will have it easier," she told reporters. Weinstein has denied having nonconsensual sex with anyone. The best picture Oscar - presented at the end of the 3-1/2-hour show - is seen as a close race between "The Shape of Water," "Three Billboards" and Universal Pictures racial satire "Get Out." "Three Billboards," the tale of an angry woman seeking justice for her daughter's killer, scooped multiple honors earlier this year, but "Get Out," a bold horror movie that became a talking point around modern-day race relations in America, appears to have gained momentum in the last two weeks, awards pundits say . "Get Out" director Jordan Peele, who also wrote the screenplay, told reporters before Sunday's ceremony that the film's message was "we are never done with the conversation about race." Peele could become the first black man in the Academy of Motion Picture Arts and Sciences' history to win a directing Oscar, while "Lady Bird" director Greta Gerwig could be only the second female to take home that prize. In the lead acting races, Frances McDormand is heavily favored to win for "Three Billboards" and British actor Gary Oldman's performance as wartime leader Winston Churchill in "Darkest Hour" is widely expected to bring his first Oscar.
#Jimmy Kimmel #Academy Awards #Sam Rockwell #Hollywood sex scandal #Oscars show #sexual misconduct scandal
You May Also like: