Kelly Osbourne too young to wed 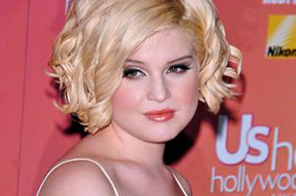 LONDON: Kelly Osbourne the daughter of Ozzy and Sharon Osbounre thinks at 24 she is too young to wed her 19-year-old model lover Luke Worrall.
Kelly Osbourne thinks she is too young to get married.
The 24-year-old star is engaged to 19-year-old model Luke Worrall but believes they should wait a few years before they tie the knot.
Kelly is so certain they will spend the rest of their lives together, she would be prepared to delay their nuptials for 50 years.
She said: "I feel too young to get married, to be honest. I think me and Luke have made the commitment to each other that we want to be together. We could actually get married now or in 50 years, it wouldn't matter."
Kelly, who is currently in training for the next series of US TV talent show 'Dancing with the Stars', is convinced their relationship will continue to work because their contrasting personalities complement one another.
She explained: "I think we really balance each other out. Where I don't know about stuff, he does and vice versa. It's a really good mix. I've never been with someone that I've had so much fun with and I've never loved someone like I've loved Luke."
Kelly - who rose to fame when she starred in MTV reality show 'The Osbournes', which focused on her family life with father Ozzy, mother Sharon and brother Jack - says her parents are putting a lot of pressure on her to get pregnant soon and give them grandchild.
She added: "Dad is worse about it than mum. Luke just says, 'Oh, right,' then giggles awkwardly.
"I'm absolutely not thinking about children at the moment though! I'm not old enough."

#Kelly Osbourne too young to wed
You May Also like: