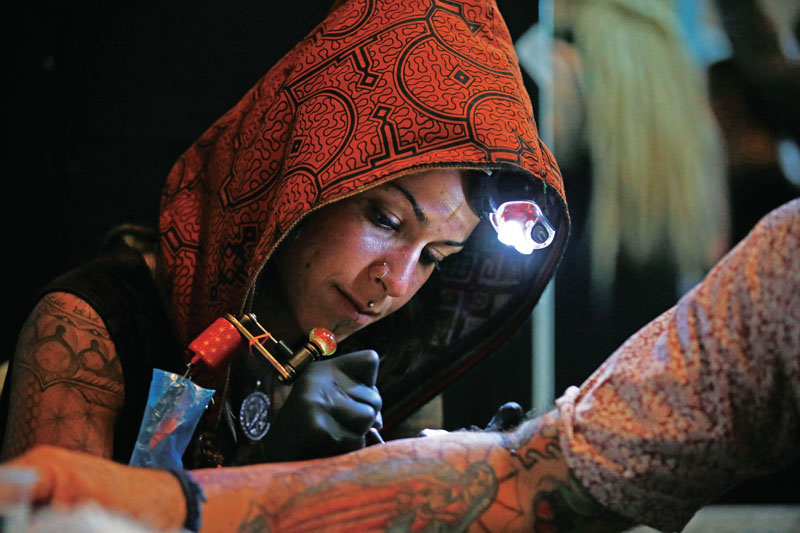 Kathmandu An international tattoo convention in Nepal! — this statement would be nothing more than a joke a decade ago for many. There were sceptics who said it is not going to work in Nepal. But the convention happened, first at the national level in 2010 and at the international level in the following years. This year it is ready to unfold its seventh edition. Sceptics exist even today, says one of the directors of the 7th International Nepal Tattoo Convention Bijay Shrestha. It seems tattoo literate people have overpowered those negative perceptions of tattoo which is why the Convention is getting bigger and better every year. The objective of starting this festival — “to put the Nepali tattoo scene on the global map” — is being fulfilled with an increased interest of international tattoo community. Increased tattoo literacy “Compared to previous years, people have become more tattoo literate,” Shrestha shares of his views on people’s perception about tattoos, further defining tattoo literacy as “the way people perceive tattoos and tattoo artists as well as their awareness about tattoo designs”. People’s perception and awareness level about tattoos has changed — “people with tattoos are not regarded as thugs or junkies anymore, and this is a big change,” he sums up. 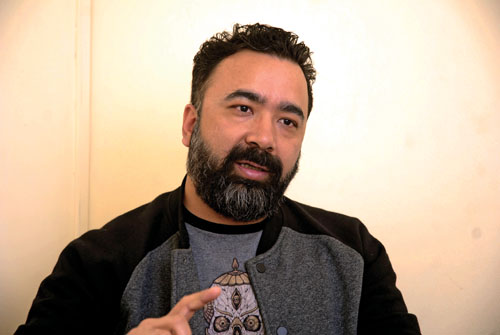 They love tattoo as an art form and specialise in diverse styles. From realistic portrayal to surrealistic works to the traditional, you can get all kinds of tattoo works done at a single venue at the Convention. And here are some such Nepali tattoo artists who will mesmerise the world with their talents at the upcoming 7th International Nepal Tattoo Convention. 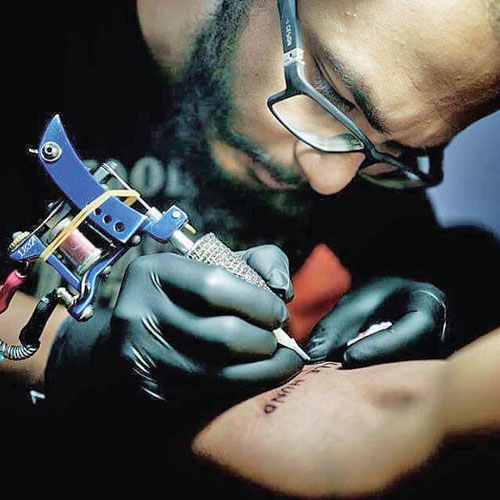 Mix of realism and surrealism Rajan Maharjan wants to tattoo his whole life, while expanding his horizon constantly. That’s why he participated in this tattoo fiesta last year for the first time. Representing his studio Ra-zone Tattoo, he will present something he loves to do. And he urges everyone not to miss this Convention “as you can meet lots of great artists and learn their individual style of tattooing, and perhaps you’ll find out what you want for your next tattoo”. Your speciality Black and grey tattoos, especially realism and surrealism. I seek my inspiration both nationally and internationally — a lot of great tattoo work come from all over the world and I try to mould it into my own style. What kind of work will you do at this Convention? I will be doing two works — both will be in black and grey with a mix of realistic portrayal and surrealism. One of them will be a surrealistic piece based on a painting of a girl entwined in black. I’m doing exactly the kind of tattoos that I love. That will be my focus. The other piece is a surprise. Your experience of previous year My experience last year was really positive. It was a great opportunity for me to interact with other artists, especially international ones. I was happy to be able to share my works with the other artists and the tattoo enthusiasts. The Convention has a very inspiring environment. 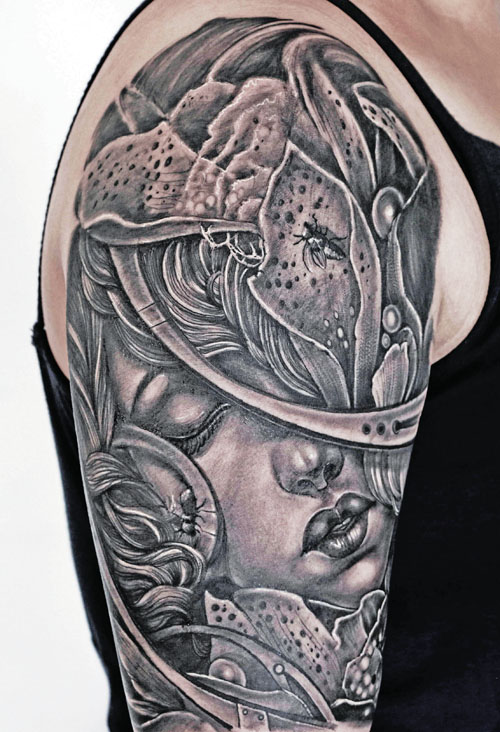 Your expectations this year I expect to meet many amazing artists from all over the world while having a good time. Why International Nepal Tattoo Convention I like to participate to learn directly from artists who set the standard for the whole tattoo industry. It’s also a great way to make new contacts and form new friendships. I also love the opportunity to represent Nepal in the tattoo field. Diverse styles Ink’s Inc, has been one of the regulars at the International Nepal Tattoo Convention since the first edition. The tattoo studio features some of the most talented tattooists who specialise in diverse styles. This year three artists — Binay Gurung, Kovit Rai and Kamal Dulal — will be working in two booths at the Convention. Their booths will boast of variety as the three artists will be working on diverse designs. 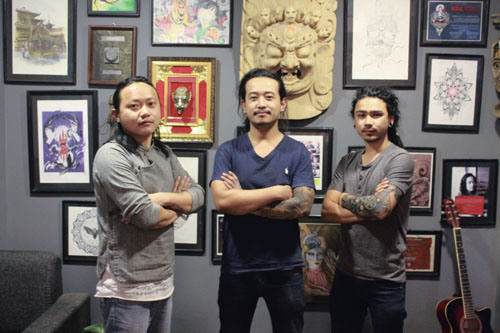 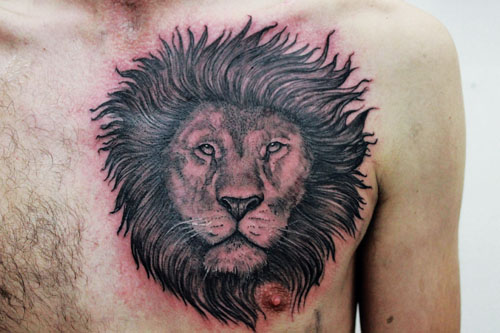 What kind of work will you do at this Convention? We will definitely be doing something that we usually love doing. We will focus may be on something traditional. And we are also planning a project for a large scale tattoo. 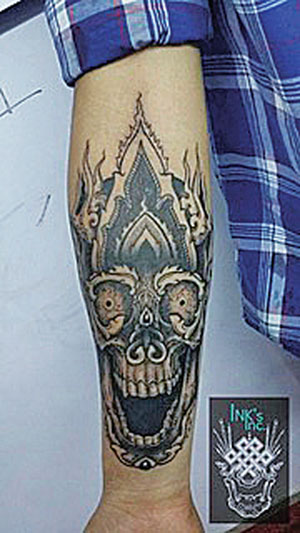 Your experiences of previous years’ Convention The Convention has always been a good and inspiring experience for us. Expectation from this Convention We can’t ask for anything more as the organisers have always been able to pull off something new. And as always, we are hoping to see and meet many new artists from all over the world. 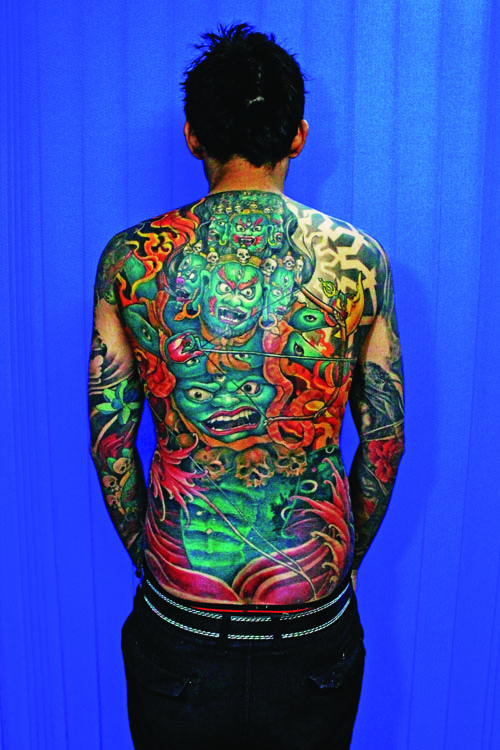 Why International Nepal Tattoo Convention We have been participating in this Convention as a studio since its inception. We love to take part in it as this is like a big festival and we don’t want to miss it. What: 7th International Nepal Tattoo Convention When: March 31 to April 2 Time: 11:00 am to 7:00 pm Where: Heritage Garden, Sanepa (Old Gyanodaya School) Ticket price: Rs 500 (3 days), Rs 200 (per day); tickets available at Mohan’s Tattoo Inn and at the venue on the days of event For more information log on to www.nepaltattooconvention.com
#Tatoo #International tattoo convention #Bijay Shrestha #Tatoo in Nepal
You May Also like: