Noa: No sex in Lopez tape 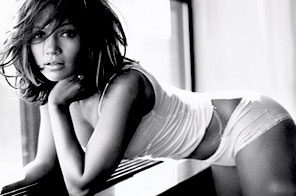 OJANI NOA doesn't understand why JENNIFER LOPEZ is so upset over his plans to release home videos of their brief marriage - because there's no sex or nudity in the footage.
The singer/actress successfully applied for a restraining order against her former partner to prevent him featuring shots of their honeymoon in his mockumentary How I Married Jennifer Lopez: the J.Lo and Ojani Noa Story.
She also launched a $10 million (£6.25 million) lawsuit against Noa earlier this month (Nov09), alleging he had violated terms of a confidentiality agreement he signed in 2005.
But Noa can't comprehend why Lopez has taken exception to the personal videos - insisting the candid scenes are completely innocent.
He tells Eonline.com, "They (Lopez and her lawyers) think I have a sex tape with her and that I'm trying to sell it. My tape is from our honeymoon, the wedding, us hanging out. There's no nudity - maybe one spanking.
"There's moments of her fighting with her mom... Couples having fun and kissing. If someone has a sex tape, it's not me."
And Noa insists he just wants to tell his story about life as a Cuban immigrant - not to profit off his famous ex.
He adds, "I have moved on. If I wanted to make a buck I would have done many interviews and I never did anything... I'm not going to harm anybody. I'm a great guy. If I was going to hurt anybody I have had many, many chances to do it. I always wish her the best. The mockumentary is about me escaping from Cuba and living here. They think it's about her but it's not, it's about me."
The two met in Miami, Florida and married in 1997 before starting divorce proceedings just ten months later.

#Noa: No sex in Lopez tape
You May Also like: