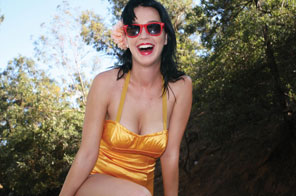 LONDON: Katy Perry has fired off an angry 'tweet' denying she's pregnant with fiance Russell Brand's baby after online critics took aim at her for planning to become a mum.
The I Kissed A Girl singer has been inundated with vile and vicious Twitter.com comments since baby reports surfaced last week (ends08Dec09) - and she's had enough.
After reading one comment from producer/songwriter Lukasz Gottwald, Perry wrote, "ur gonna make me cry, maybe that's my period tho. That's Right I'm Bleeding."
She added, "Better luck next month peepz."
Perry then lashed out at him for questioning her punctuality.
After Gottwald (aka Doctor Luke) wrote, "Everybody please send a friendly poem to @katyperry on punctuality !!!"