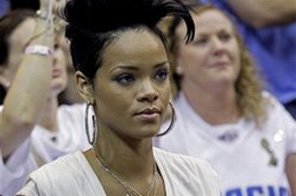 Singer and model Rihanna watches the second quarter of Game 4 of the NBA basketball finals between the Los Angeles Lakers and Orlando Magic Thursday, June 11, 2009, in Orlando, Fla. Source: AP

ORLANDO: R&B singer Chris Brown and former girlfriend Rihanna were among the celebrities in the crowd at the fourth game of the NBA Finals in Orlando.

They were sitting on opposite ends of the same row under the basket Thursday night at Amway Arena. Brown is accused of beating then-girlfriend Rihanna after a pre-Grammy party in February in Los Angeles. The case is still pending.

Brown's preliminary hearing is scheduled for June 22. A judge will decide whether there is enough evidence to continue the case. Rihanna could be called as a witness during that hearing.

Other celebrities at the game included Tiger Woods and former professional wrestler Hulk Hogan. In an awkward meeting, Hogan stunned Woods just before the game when he went up to greet the world's No. 1-ranked golfer, who at first didn't see the towering figure standing in front of his courtside seat.

#Rihanna #Brown seen at NBA game
You May Also like: