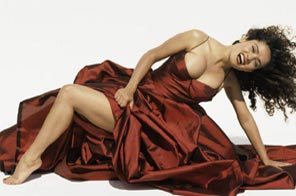 The actress hit the streets of Los Angeles in disguise to pick up pinatas, favours and food and then faced a frantic search for a Barney to perform at her daughter Valentina's party, reported hollywood.com.

'I was terrified. I wanted Valentina (daughter) to love it and I hired somebody to plan it for me. She quit two days before the party, once everybody was invited. I have no idea why she left me with nothing,' said Hayek.

'And the worst part was I told Valentina that Barney was coming and she was so excited. I invited the people, she knows the whole programme and I have nothing. Then I decided to do it myself,' she added.

#Salma Hayek turns party planner
You May Also like: