Telling stories from an autopsy room 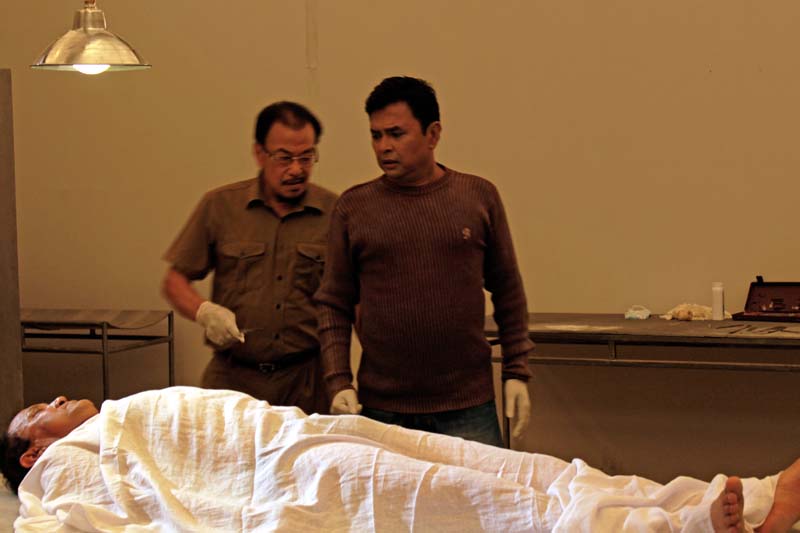 Photo Courtesy: Aryan Neupane
Kathmandu The young man tells the elder one, “I don’t think I can do such work.” The elder man then says, “If you need to make a living, you need to be able to do anything. Come dissect this body.” This is a scene of an upcoming movie Bhuimaanchhey that was shot on June 24 by Bidur Pandey at Nepal Film Development Company Ltd, Balaju. The two characters are conversing in a post-mortem room standing in front of an autopsy table. The young man (Ramesh Budhathoki) tries to follow the old man’s (Sanu Tamrakar) instructions. The young man is afraid and his hand shakes, he sweats, steps back and looks at the old man. The old man scolds him and without looking at the cadaver, he brings a sharp blade to the corpse’s neck. “The scene of a man dissecting a dead body is an important part of this movie as this depicts the psychological state of the man working in an autopsy room learning to dissect dead bodies,” informs Aryan Neupane, coordinator of Shailee Theatre (one of the producers). Then in another scene the young man is seen fighting seven dead bodies. “We are capturing a dream fight here. As the fight is with dead bodies, it is interesting. As such fights (with dead bodies) are rare in Nepali cinema, I feel it is an interesting one,” explained fight director Asta Maharjan. Corpses are dissected to find the cause of death — natural, accidental, homicide, suicide or others. But people here are unaware about people who dissect dead bodies in a forensic lab. The film narrates the story of such a man. “As the stories of such people have not been told, we felt the need to tell their stories through the movie,” shared director Nawaraj Budhathoki. About his role, Ramesh, who has been cast in the lead, said, “I felt, the content and presentation of the movie are different from other Nepali movies. That is why I decided to do this movie. It narrates the story of a man who unwillingly becomes a pathologist. It was a challenge for me.” The movie features Ramesh, Sipora Gurung, Rohini Bhattarai, Sahin Prajapati, Puskar Gurung, Ram Babu Regmi, Badal Bhatta, Tara KC, Sashank Bohora, Aryan Neupane, among others. Ninety per cent of the shooting of the movie is complete and it is slated for a November release.
#Shailee Theatre #Bhuimaanchhey #Bidur Pandey #Nepal Film Development Company Ltd #autopsy table
You May Also like: