Timberlake not to play with Biel 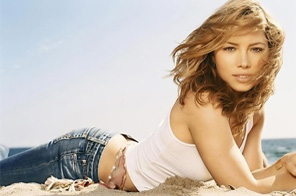 LONDON: Justin Timberlake is refusing to play golf with Jessica Biel because she is better than him.
The 'Sexy Back' star has reportedly told his actress girlfriend to find a new partner after a game between the two saw her walk away victorious.
A source said: "Jessica just joined his course, Brentwood Country Club, but he prefers not to play with her since she's gotten so good.
"It's too bad because he got her into golf in the first place."
Despite her growing prowess, it was reported last year that Jessica only took up the sport to spend more time with her boyfriend.
A source said: "Jessica isn't really that interested in golf, but she really wants to get better at it. It will give her more time to spend with Justin, since he plays 18 holes a couple of times a week."
Justin, who plays off an impressive six handicap, is such a fan of the sport he owns his own course - the Big Creek Golf Course near Memphis - and also hosts a charity Professional Golf Association (PGA) Tour event, the Justin Timberlake Shriners Hospitals for Children Open in Las Vegas.
Despite his various career achievements, Justin recently revealed his proudest accomplishments relate to his sporting passion.
He said: "I loved appearing on the cover of Golf Digest magazine. I'm not going to lie. I mean, I'm done. I don't have to do another magazine cover ever again."

#Timberlake not to play with Biel
You May Also like: