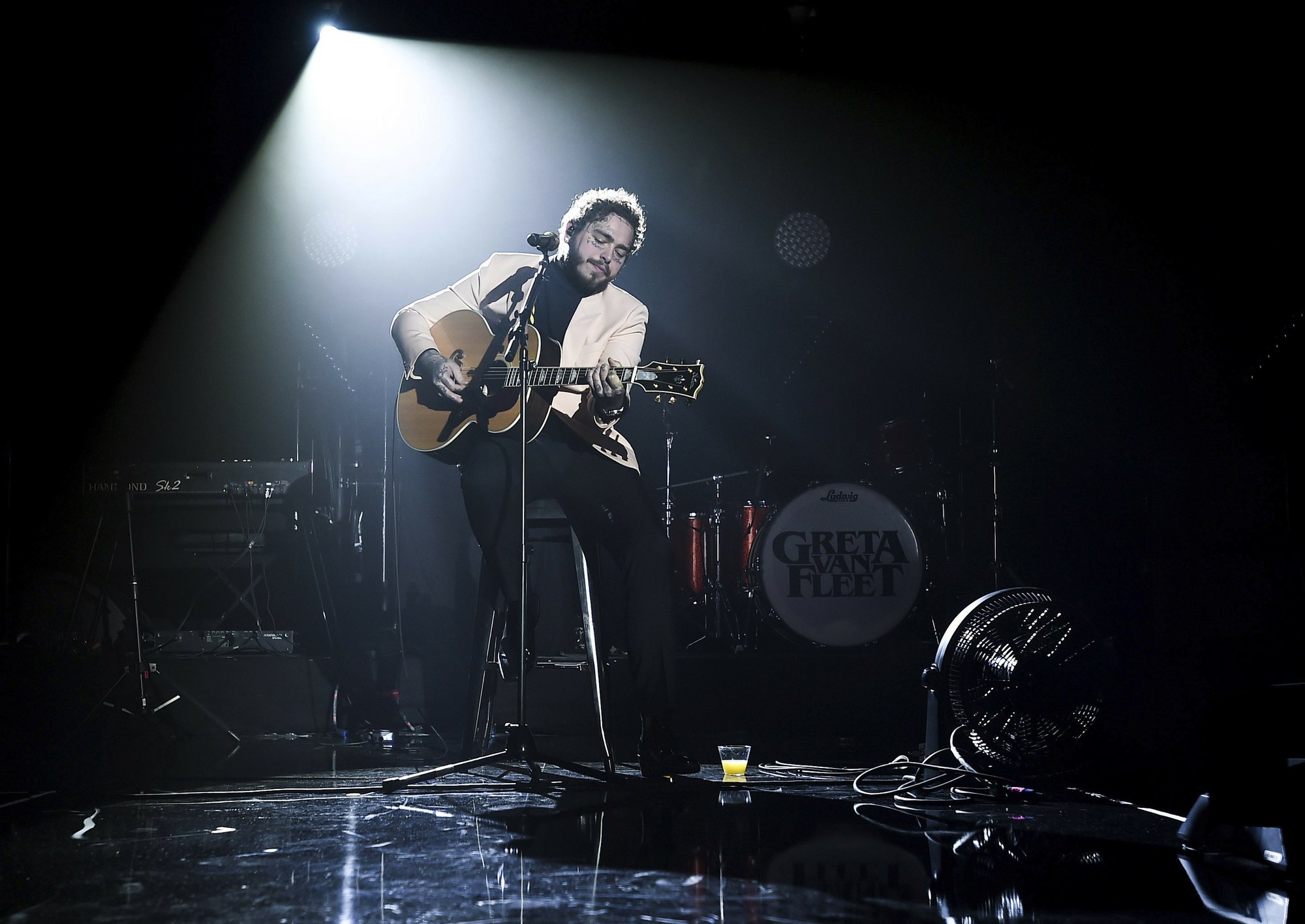 In this photo provided by Universal Music Group, Post Malone performs at Sir Lucian Grainge's 2019 Artist Showcase Presented by Citi on Saturday, Feb. 9, 2019 in Los Angeles. Photo: AP
LOS ANGELES: Post Malone, who is competing for record and album of the year Grammys, closed out Universal Music Group’s annual pre-Grammy showcase, which was also highlighted by YG dissing President Donald Trump and K-pop sensation BLACKPINK, who made their US debut performance. Malone, who is nominated for four Grammys, talked about hurting his finger before he sang while playing a guitar at the two-hour event Saturday. The showcase also featured trailers for upcoming documentaries including one on the Bee Gees and the history of mixtapes. The invite-only event showcased the label’s established and new talent in a room with more than 300 attendees that included music industry players, press and artists. BLACKPINK was in high demand from those on social media who wanted to see the girl group perform. The South Korean group, comprised of Jisoo, Jennie, Lisa and Rosé, didn’t disappoint as many in the room gave them a standing ovation after their set. YG questioned whether he should perform “FDT,” which explicitly criticizes Trump. But the Los Angeles-based rapper said he felt he needed to perform the controversial song to “make a statement.” Afterward, YG went on to perform the radio hit “Big Bank” with 2Chainz, who then went solo for his song “Different.” Oscar-nominated director Frank Marshall announced the trailer of “Bee Gees.” Other trailers shown were “From Scratch,” ″The Go-Go’s” and “Ice Cold,” which delves into the story of hip-hop jewelry. Ella Mai kicked off the showcase with a couple of songs including “Shot Clock” and “Boo’d Up,” nominated for both song of the year and best R&B song. The song hit No. 1 on the Billboard R&B songs chart and peaked at five in Hot 100. Rapper Lil Baby made a brief appearance, performing “Yes Indeed” and “Drip Too Hard.” Before his set, some wondered if the rapper would attend the showcase following his recent arrest in Atlanta for reckless driving in a Corvette. Lil Baby faces charges of failing to signal when changing lanes, reckless driving and attempting to flee or elude police. He was released on bond in time for his performance. Other performers included Midland along with Grammy-nominated artists J Balvin and Greta Van Fleet, who is up for three awards including best new artist. Balvin’s song “I Like It” featuring Cardi B earned a nod for record of the year at Sunday’s Grammys.
#music #Donald Trump #North America #music industry #Grammys #Post Malone #YG #Pre-Grammys #Blackpink
You May Also like: