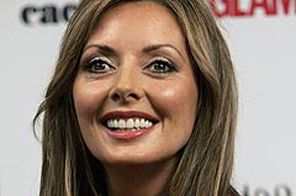 The 48-year-old said life is harder for people with facial disfigurements because of the media's obsession with beauty.

She made the comments in a discussion group called Facing Disfigurement at Cheltenham Town Hall alongside her older brother Anton, who was born with a double cleft lip.

Vorderman, who is patron of the Cleft Lip and Palate Association, said that television, in particular, could make a difference to the public's perception of facial disfigurement.

She said: "There are the serious documentaries which are very good and there are programmes which treat serious illnesses as entertainment, as freaky people.

"If there could be a character in say, Coronation Street, which is watched by millions and they had a visible difference, but it was no big deal, then it would make such a difference.