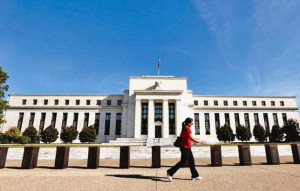 A women walks past the FR headquaters

Fed Chair Janet Yellen has made clear she would rather delay an interest rate hike for too long than move sooner and risk jeopardising a tepid economic recovery, a conviction that will face its sharpest test yet on Thursday. Having weighed the economy’s steady march toward full employment against the backdrop of weak inflation and wage growth and turbulence overseas, the US central bank will issue its latest rate decision at the end of a two-day policy meeting. A rate hike would be the first in the United States in nearly a decade. Fed watchers, however, see the outcome as a toss-up, with Yellen’s consistently stated desire to see workers reap more benefits from the recovery, coupled with weak price rises and a variety of global risks, looming large. “It is a game-time decision. The key is what Yellen thinks and my guess is that she will want to wait,” said Mark Zandi, chief economist for Moody’s Analytics. “If you put yourself in her shoes, you don’t want to make a mistake by going too soon.”

Oil prices were stable on Thursday as a US stock draw tightened the market while Asia’s economies showed new signs of weakness.US West Texas Intermediate (WTI) crude futures were trading at USD 47.13 per barrel at 0430 GMT, virtually unchanged from their previous close, while Brent was up 6 cents at USD 49.81 per barrel. That followed a price jump of as much as six per cent in the previous session when data from the US Energy Information Administration showed the largest crude drawdown since February 2014 at the Cushing, Oklahoma, delivery point. Singapore-based brokerage Phillip Futures said that the stock draw was “a result of higher refining activity and lower US crude production which is helping the US inventory glut to ease off”.