'3-point pact to address all concerns of Madhesi parties' 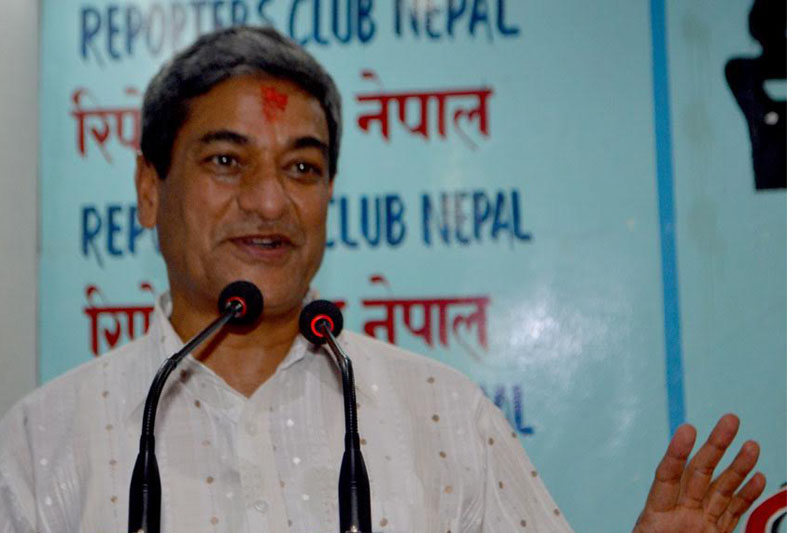 Minister for Physical Infrastructure and Transport Ramesh Lekhak speaks with journalists in Kathmandu, on Saturday, August 6, 2016. Photo: Reporters' Club
KATHMANDU: Minister for Physical Infrastructure and Transport Ramesh Lekhak has said the government has already begun implementing the three-point agreement signed between the new ruling coalition and agitating Madhesi parties; and it would address all concerns of the Madhesi parties with a constitution amendment. After decisions of the second Cabinet meeting held on Friday, the government began implementing the pact and it would be fully implemented with the constitution amendment, he hoped. Lekhak was speaking with journalists at the Reporters' Club in the Capital today. The government yesterday had decided to provide Rs 1 million each to the families of those killed in protests carried out by the United Democratic Madhesi Front and the Federal Alliance. The decision had followed a commitment of the ruling parties, Nepali Congress and CPN Maoist Centre, in front of the agitating blocs which they had signed on Wednesday to convince the latter to vote for Maoist leader Pushpa Kamal Dahal as the new Prime Minister. Lekhak was of the view that the UDMF, which was protesting the Constitution promulgated in September last year, was now ready to discuss their concerns peacefully. The Nepali Congress leader, meanwhile, informed that the government would get the full shape soon. Lekhak spelled that the new government would prioritise Constitution implementation, relief to earthquake survivors, peace, security and good governance.
#Nepali Congress #United Democratic Madhesi Front #Madhesi parties #New government #Ramesh Lekhak #constitution amendment
You May Also like: