Kathmandu-Nijgadh fast track will be completed in time: Defence Minister 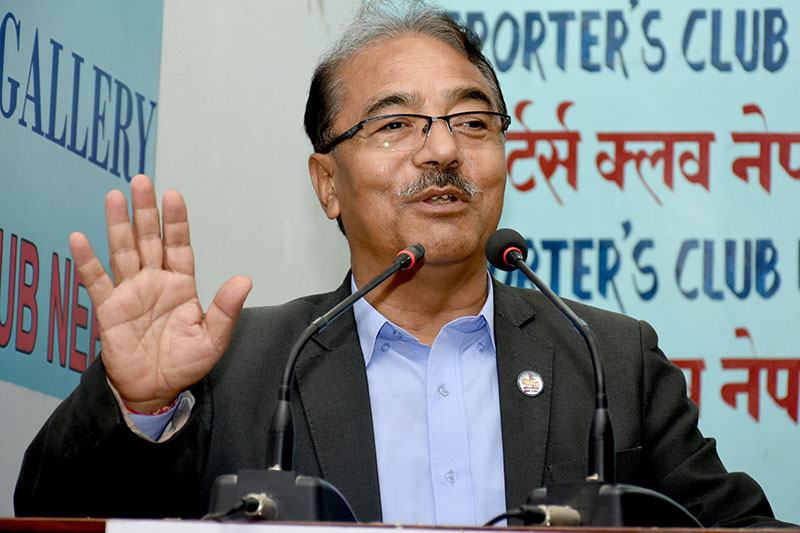 Minister for Defence Bhimsen Das Pradhan speaking at an interaction programme in Kathmandu, on Sunday, September 24, 2017. Courtesy: Reporters Club
KATHMANDU: The Minister for Defence Bhimsen Das Pradhan said that the under construction Kathmandu-Nijgadh fast track will be completed on stipulated time. He also said that people are aspiring to see more involvment of Nepali Army in developmental projects in the country, at an interaction programme in the Capital today. "Nepali Army has always remained committed in completing projects even during the hard times as well," Pradhan shared. "Army has been assigned with national pride projects including Kathmandu-Nijgadh fast track and expressed optimism that NA would complete the projects in time," NC leader said. He said the government is preparing to import necessary equipment for the construction of 9 kilometres of tunnel along the fast track and 99 bridges would be built in the national pride project. NC leader Pradhan said that the NA had successfully completed the Karnali corridor of Humla-Simikot road stretch and 196 km road would come into operation in next two years. Leader Pradhan has said that NA have won the hearts of Nepalis and people are aspiring to see more developmental projects handed over to the national army.
#Nepali Congress #Ministry of Defence #Bhimsen Das Pradhan #Kathmandu-Nijgadh Fast Track
You May Also like: