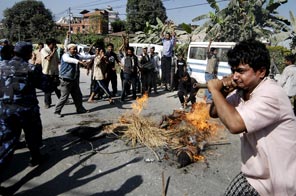 KATHMANDU: The Supreme Federation of Nepal National Transport Entrepreneur (SFNNTE) today called off the Valley strike slated for tomorrow. The move follows the Supreme Court’s interim order against the Cabinet’s decision to phase out the cooking gas-run tempo.
Confirming the decision, Bishnu Siwakoti, president of SFNNTE, said they withdrew the bandh in view of the SC
order. The SC had issued the stay order urging the government not to implement its decision. Ram Kumar Blon, coordinator of the Federation’s ad-hoc committee, had filed a writ petition
on Monday challenging the government decision and seeking the apex court’s
intervention.