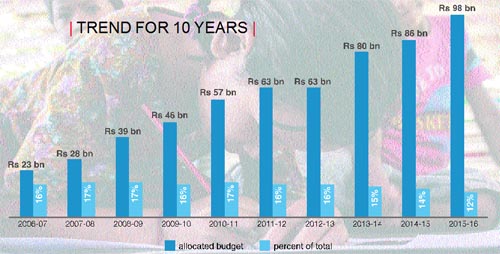 The government has allocated Rs 98.64 billion for the education sector for the fiscal year 2015-16. Though sectorwise, the budget allocated for the education sector is highest, percentage pointwise, at 12 per cent, it is the lowest in the last 10 years. Finance Minister Ram Sharan Mahat presented Rs 819.47 billion budget for fiscal year 2015-16 yesterday.

A senior official at the Ministry of Education on Wednesday said the budget allocated for the education sector was not sufficient, given the destruction caused by the April earthquake in schools and other entities.

Speaking at an interaction organised by Education Journalists Network, Dr Laba Deo Awasthi, Joint Secretary, MoE, said, “The budget is inadequate to reconstruct school buildings damaged by the quake and run other regular programmes. We will talk to the Ministry of Finance on this matter.” For the fiscal year 2014-15, the government had allocated Rs 86.03 billion, which was 14 per cent of the total budget.

He said that the budget allocated by the government should not be considered as the final budget in the education sector.

Constituent Assembly member Umesh Shrestha, who is also the president of Higher Secondary Schools Association Nepal, said the management part of the government was very weak, hence it failed to properly use the allocated budget in the education sector this fiscal.

Tilak Kunwar, General Secretary, Confederation of Nepalese Teachers, said that the government has been blaming teachers for the degrading quality of education in community schools, but the government itself also has failed to bring new programmes to enhance teaching skills of teachers. Educationist Bidhya Nath Koirala said that some new programmes were added in the budget this time, but what is challenging is the implementation part.

Suprabhat Bhandari, president, Guardians Association of Nepal, said that budget allocation in education was against the commitment of the state in international forum to increase the education budget to make it 20 per cent.