CJ fixes 30 minutes for lawyers to plead their case

KATHMANDU, JANUARY 20 The constitutional bench has set a 30-minute time limit for lawyers to argue in favour or against the dissolution of the House of Representatives in the Supreme Court. 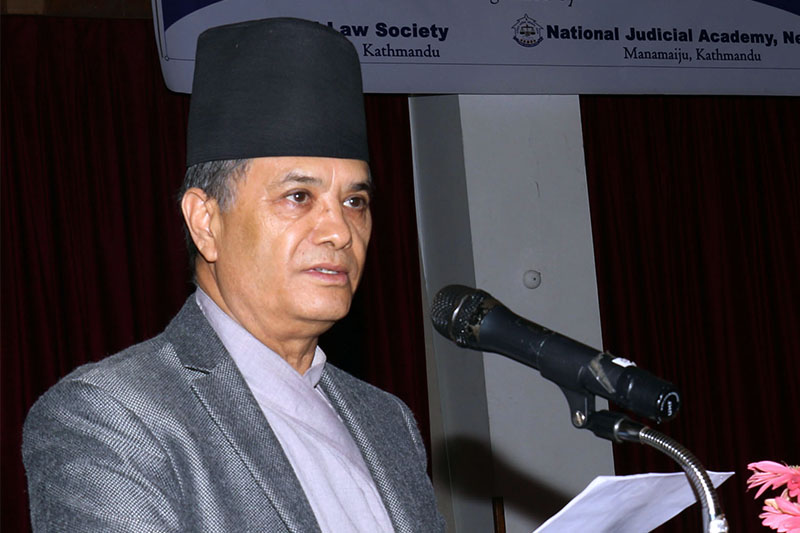 Chief Justice Cholendra Shumsher JB Rana speaks at a programme in Kathmandu, on Friday, February 08, 2019. Photo: RSS
Chief Justice Cholendra Shumsher JB Rana, who leads the five-member constitutional bench, told the lawyers to limit their pleading to 30 minutes each. The decision was taken keeping in mind a large number of lawyers who are yet to plead their case. Almost 200 lawyers have submitted their attorney appointment applications at the court, according to the SC’s Communication Expert Kishor Paudel. He said the CJ might give some lawyers more time if they so pleaded and the CJ deemed it appropriate. Meanwhile, lawyers representing the petitioners who have challenged the dissolution of the House of Representatives continued to argue before the constitutional bench that Prime Minister KP Sharma Oli did not have the power to dissolve the HoR. Senior Advocate Chandra Kanta Gyawali said the PM appointed under Article 76 (1) and (2) did not have the power to dissolve the Lower House. Article 76 (1) provides for the formation of majority government when a political party has a clear majority in the HoR, while Article 76 (2) provisions for the formation of a coalition government. In a federal system like Nepal’s, the Parliament is more powerful than the prime minister, he argued. Gyawali said when Oli formed the government, the notification issued in the gazette stated that the PM formed the government under Article 76 (2) and should have sought a vote of confidence when the Samajbadi Party-Nepal withdrew its support to the government. He said since there were errors of laws and jurisdiction in the PM’s decision to dissolve the HoR, the House should be reinstated. Advocate Kanchan Krishna Neupane, who is one of the 13 petitioners to have challenged the dissolution of the HoR, said sub-articles of Article 76 only dealt with the formation of a new government and 76 (7) provided for the dissolution of the HoR only if there was no possibility of the formation of a new government, which was not the case when the PM decided to dissolve the HoR. Neupane said Oli was challenging the separation of powers by repeatedly using the phrase that the House would not be reinstated. Justice Anil Kumar Sinha said the bench would not be influenced by anybody’s statement. Senior Advocate Krishna Prasad Bhandari also pleaded on behalf of the petitioners.
#Supreme Court #Constitutional Bench #Chief Justice Cholendra Shumsher JB Rana #HoR dissolution #dissolution of the house of representatives #dissolution of the HoR #Hearing on HoR dissolution
You May Also like: