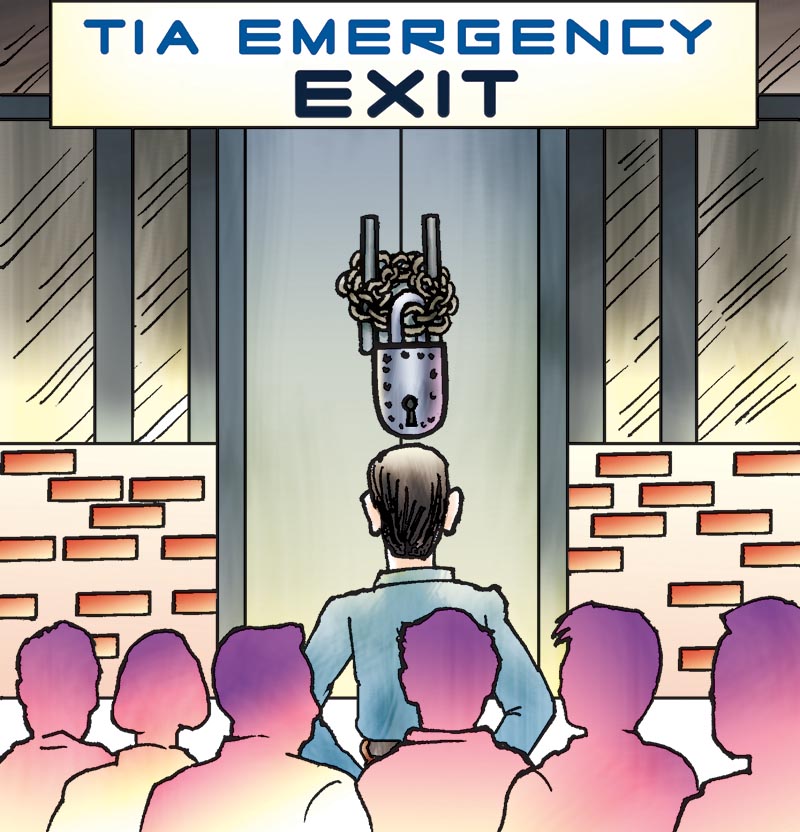 Illustration: Ratna Sagar Shrestha/THT
Kathmandu, March 25 If an emergency strikes Tribhuvan International Airport and you are in the terminal building looking for an escape route, chances are you will run into a locked door. That’s because all emergency exits at TIA meant for escaping in case of fire or any other untoward incident are, in fact, chained and locked! There are 12 emergency exit doors at TIA and all are locked. According to airport authorities, travellers were misusing the emergency exit doors.  “As the doors are linked to other areas of TIA, people were using them as shortcuts. They also started throwing packets of noodles, cigarettes, biscuits, paper cups and other garbage on the escape route. That is why we decided to shut the doors,” said Raj Kumar Chhetri, general manager of TIA. He, however, hastened to add that people do not have to worry, as keys to the locked doors are kept nearby. “We have locked the emergency doors for security purposes. The keys have been kept nearby so that anybody can open the locks in case of an emergency,” he added. What TIA authorities seem to have overlooked while taking this decision is that fundamentally emergency exit doors must remain open at all times. The Nepal National Building Code 2015 also mentions that exit doors in assembly buildings shall have easy access to escape route. The code adds that people should be able to open emergency exit doors ‘without a key from the inner side’. However, TIA authorities have used chain and a padlock to lock emergency exits. Being the sole international airport of the country, TIA handles a large number of passengers daily. In such a scenario, a single incident can lead to a disaster if emergency exit doors are locked when people are trying to escape. Even when the earthquake struck on 25 April 2015 the emergency exit doors were locked. According to an official at TIA, passenger movement was low on that day and passengers were managed somehow. But that may not be the case when emergency strikes TIA again.
#Tribhuvan International Airport #disaster
You May Also like: