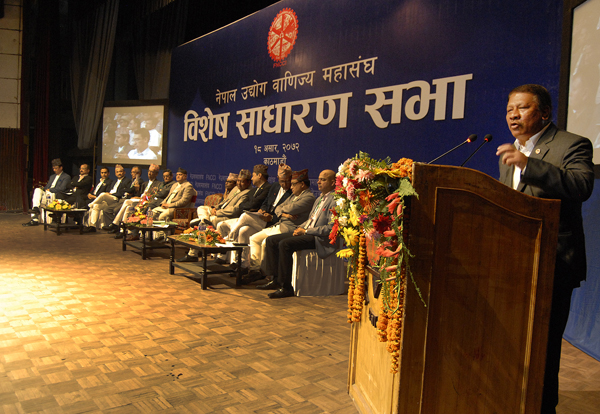 Deputy Prime Minister Prakash Man Singh addressing an inaugural function of FNCCIs special general meeting in Kathmandu, on Friday.
Photo: THT file
KATHMANDU: Deputy Prime Minister and Home Minister Prakash Man Singh on Saturday urged one and all to give their maximum suggestions on the draft constitution. At a programme organised by Kathmandu-32 on the occasion of the Nepali Congress's upcoming 13th General Convention, DPM Singh stressed the need for identifying issues missing in the draft constitution so as to make the new constitution in the interest of Nepal and Nepali people. He underscored that constitution making process is heading towards important phase following the 2005/2006 movement, the Comprehensive Peace Agreement and the latest 16-point deal among the political parties. "This should be viewed as an important opportunity for suggestions with visionary thoughts to draft the new constitution to make it useful for the coming generations," DPM Singh said. "The proposed draft of the constitution is an instrument of agreement among the political parties with different persuasions, so it does not encompass 100 per cent sentiments of all the parties," DPM Singh asserted. The DPM said that the parties were making efforts to include their issues at the highest level in the new constitution. "Nepali Congress is making effort to include majority of the issues it mentioned in its manifesto during the Constituent Assembly election," he said. On the occasion, Constituent Assembly member Mohan Kumar Rai said the new constitution would be a constitution of the people and added that the constitution writing has reached final stage as per the commitment made by Nepali Congress during the CA election. Nepali Congress General Convention representative Narendra Kumar Gurung expressed his confidence that the convention would elect a proactive leadership to instill more vigour in the party organisation.
#Draft constitution #Deputy Prime Minister and Home Minister Prakash Man Singh #suggestions
You May Also like: