KATHMANDU, JANUARY 5 The Election Commission has amended its rules to formalise the split in the ruling Nepal Communist Party (NCP). Earlier rules didn’t allow the poll panel to recognise a split in a party after announcement of general elections. After amending its rules, the EC can now decide which faction of the NCP is authentic and which should register with the poll panel under a new name. Spokesperson for the Election Commission Raj Kumar Shrestha said the amendment meant that the EC could hear claims and counter claims of parties’ factions about who should use the original party’s name, flag, and election symbol during the election. According to Shrestha, previous rules prohibited the EC from recognising a splinter group as a new party even after it submitted signatures of 40 per cent of Central Committee members and the Parliamentary Party. A source at the EC said the poll panel amended its rules to recognise a split in the NCP after Prime Minister KP Sharma Oli dissolved the House of Representatives. 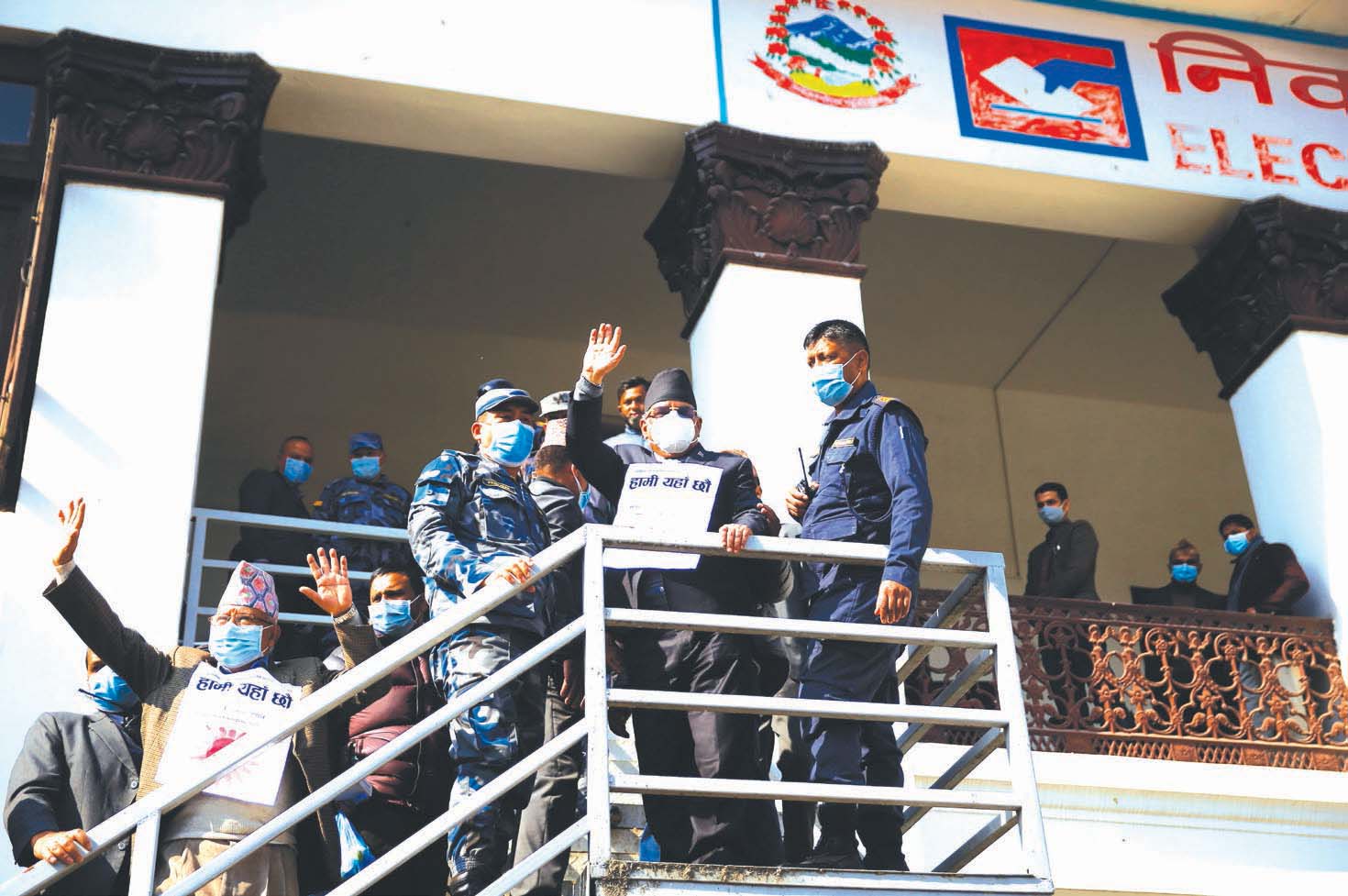 File - Nepal Communist Party (NCP) leaders Pushpa Kamal Dahal (right) and Madhav Kumar Nepal waving to their supporters from the building of Election Commission during a protest against the dissolution of the House of Representatives, in Kathmandu, on Friday, December 25, 2020. Photo: THT
“One faction of the NCP will be deemed authentic. The other faction will have to register with the EC under a new name, flag and election symbol. The amended rules will allow the splinter group to register with the EC and take part in elections,” the EC source said. Former Chief Election Commissioner Neil Kantha Uprety said previous rules were framed to prevent parties from splitting during election. “Moreover, the EC takes at least 75 days to complete formalities to recognise a split in a party. If it does so during an election, it could hamper its poll preparations,” Uprety added. Uprety said the EC’s decision to amend its rules was a positive step, as the largest party — the NCP — was on the verge of a split. Election Commissioner Narendra Dahal said the EC amended its rules to ensure that no party got an unfair advantage during elections.
#Election Commission #Nepal Communist Party (NCP) #Nepal Communist Party (NCP) split #NCP SPLIT
You May Also like: