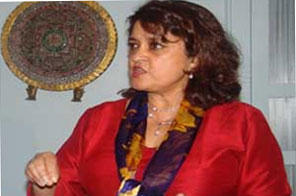 KATHMANDU:Foreign Minister (FM) Sujata Koirala consulted with Prime Minister Madhav Kumar Nepal at his official residence in Baluwatar, Kathmandu on Tuesday morning.
According to sources, they discussed the present political crisis of the country. FM Koirala urged Nepal not to believe the news about Nepali Congress president Girija Prasad Koirala trying to seek an alternative to the present government. She assured that the NC is against the new government.
The meeting has come at a time amid rumours of the present government being toppled with the UCPN-Maoist proposing NC president Koirala as the new PM. However, the Maoist leaders slammed the proposal after the meeting of NC president Koirala and Maoist chairman Pushpa Kamal Dahal on Sunday at the residence of Lok Man Singh Karki, former chief secretary during the royal regime.

#FM Koirala consults with PM
You May Also like: