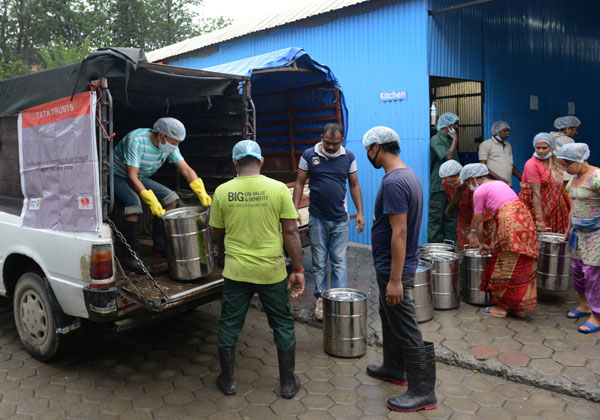 In this photograph taken on June 26, 2015, Akshaya Patra Foundation workers load metal containers with cooked meals for delivery to Nepal earthquake victims from a kitchen in Bhaktapur on the outskirts of Kathmandu. For thousands of quake victims in the Kathmandu valley, the arrival of a white van outside their tents twice a day provides rare comfort, holding the promise of a hot meal. Photo: AFP
BHAKTAPUR: The arrival twice a day of a white van holding the promise of a hot meal provides rare comfort to thousands of homeless quake victims in the Kathmandu valley. As volunteers unload huge metal containers from the vehicle, hundreds line up to fill empty bowls with rice, lentils and vegetable curry. "It is good warm food and they are always on time," said Nuchhe Laxmi Prajapati, a tailor who lost her home and livelihood in the April 25 quake, which killed more than 8,800 people in the Himalayan nation. "This meal is a relief at a time like this," the 40-year-old told AFP. Every day, the kitchen is up and running before sunrise, as workers chop potatoes and boil rice to feed some 8,000 people living in camps around the capital after the disaster destroyed more than half a million homes. The initiative, set up in mid-June by Indian non-profits Jamsetji Tata Trust and Akshaya Patra Foundation, as well as Nepal's Sipradian Sahayata Sanstha, will run for at least six months, organisers say. The strictly vegetarian menu was designed in consultation with Nepalese staff and accommodates locals' preference for rice over other grains. To that effect, the 2,500 square foot (230 square metre) temporary kitchen is equipped with three 600-litre capacity cauldrons to boil rice as well as machines to grind spices and cut massive quantities of vegetables. According to Hindu mythology, "akshaya patra" refers to a magical vessel which holds an inexhaustible supply of food, and the foundation is known for its contribution to the Indian government's free school lunch scheme, feeding 1.4 million children a day. Organisers kicked off operations in Nepal by feeding 1,100 people at a single camp housing displaced villagers from badly-hit Sindhupalchowk district before going on to serve up meals at locations across the valley. "It is a way to ease the pain of the people," said Jeetabarta Ningthoujam, the foundation's senior communications manager. "At least if they don't have to worry about two meals a day, they can think about rebuilding their homes and lives," Ningthoujam added.
#free meals #Nepal quake victims
You May Also like: