GAESO hits out at rival body 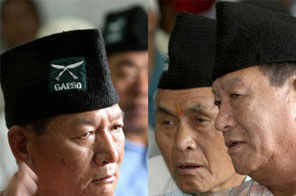 KATHMANDU:Gurkha Army Ex-Servicemen’s Organisation (GAESO) today expressed serious concern about the ‘fresh stir perpetrated by a handful of anti-Nepali persons’ against the British government calling it a ‘ploy to eclipse the recent victory of thousands of Gurkha pensioners’.
Padam Bahadur Gurung, president of GAESO, was reacting to a rally organised by a dozen of ex-Gurkhas at British Parliament on Wednesday, demanding the government provide them equal pension rights with UK-born soldiers.
Talking to The Himalayan Times, Gurung said, “A handful of anti-Gurkhas, who have already well settled in the UK, don’t want thousands of veterans to enjoy the rights that the British parliament has granted of late. They are
trying to create division among the pensioners and provoke the UK government.”
British Gurkha Welfare Society (BGWS), which organised the
rally, said most Gurkhas who retired before 1997 would prefer
to stay in Nepal but are dependent on charities.
Around 36,000 Gurkha pensioners, who served before 1997, presently receive either no pension or less than a third of what their British counterparts receive. Gurkhas celebrated this summer when a long campaign, fronted by actress Joanna Lumley, secured
the right for all those with four years’ service to settle in the
UK but they say fewer would take up the right if their pensions were not raised as well.
“At a time when the British government is preparing to implement the decisions it recently made in the interest of all veterans, the protest won’t help us,” argued Gurung, adding that GAESO did not have any link with the BGWS protesters. He informed that Lumley had refused to express solidarity with the protest since it was against the policy of GAESO.
“We have to wait for at least six months to let the government implement the agreements. It isn’t time for agitation,” he said.

#GAESO hits out at rival body
You May Also like: