‘Government not doing enough to control air and noise pollution’ 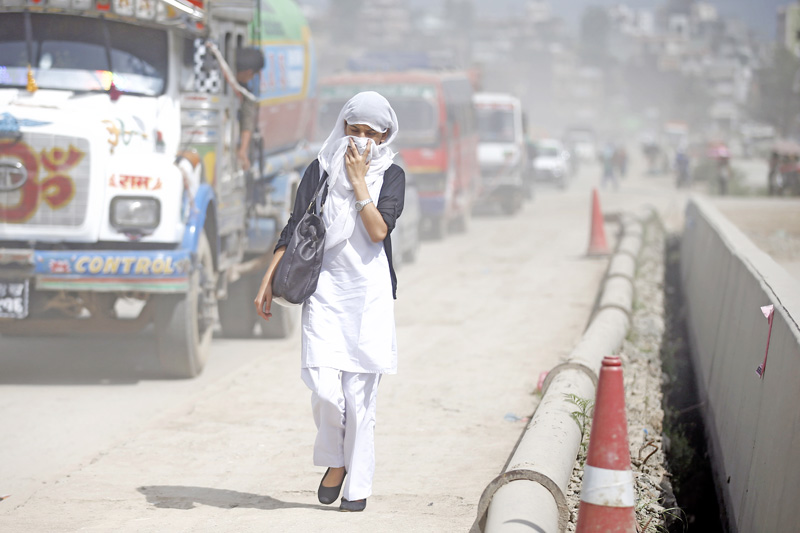 A woman covers her face to shield polluted air in Balkhu, Kathmandu on Thursday, September 22, 2016. Nepal ranks 177 among 180 countries in terms of air quality with pollution index of 81.76. Photo: Skanda Gautam
Kathmandu, December 14 Stakeholders have expressed dissatisfaction with the government for not doing enough to control air and noise pollution. Speaking at a workshop on National Pollution Control Strategy and Action Plan organised by the Department of Environment, Deputy Superintendent of Police at Metropolitan Traffic Police Division Binod Ghimire said even vehicles that emitted high levels of toxic pollutants were being allowed to move freely due to lack of laws to regulate them. “Bullet bikes produce sound of more than 100 decibels and a majority of vehicles emit high levels of toxic pollutants, but we have not been able to punish them,” he said, adding, “It’s high time the government took initiatives to control pollution and allow traffic police to punish polluter vehicles.” Similarly, Anandaraj Khanal, director at Nepal Telecom, and Mohan Katuwal, vice-chairman of Federation of Grill and Steel Fabricators Association urged the government to collect air pollution data. Speaking at the program, Secretary at the Ministry of Population and Environment Dr Bishwo Nath Oli said the government would prepare pollution control strategy by incorporating suggestions from related stakeholders. Team leader of NPCSAP Dr Bhupendra Devkota presented a draft of National Pollution Control Strategy and Action Plan at the workshop. The Department of Environment has set up three air quality monitoring stations in Kathmandu Valley and Dhulikhel recently. Though air pollution monitoring practice in Nepal began in 2002, no station was functional since 2009. The Danish government had set up seven air quality stations in the Valley in 2002. Five of these stations were built in Machchegaun, Kirtipur, Patan, Putalisadak, and Bhaktapur each, and two in Thamel. After the stations were handed over to the government in 2008, the government entrusted Environment and Public Health Organisation with operating the stations. However, a misunderstanding between the government and ENPHO led to the closure of stations in 2009.
#air pollution #Department of Environment #Ministry of Population and Environment #noise pollution #National Pollution Control Strategy #National Pollution Control Strategy and Action Plan
You May Also like: