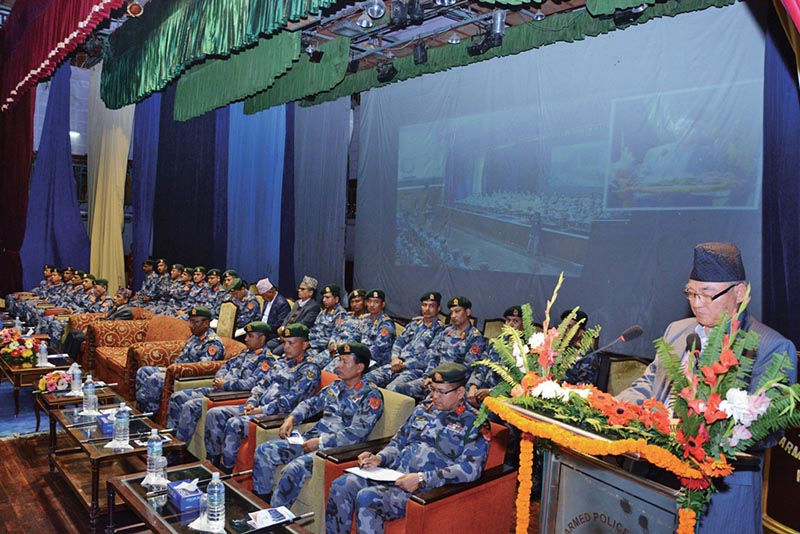 Minister for Home Affairs Ram Bahadur Thapa addressing a programme at Armed Police Force headquarters, in Kathmandu, on Friday, March 2, 2018. Photo: THT
Kathmandu, March 2 Minister for Home Affairs Ram Bahadur Thapa today visited the Armed Police Force headquarters in Halchowk and took stock of security arrangement and requirements. On the occasion, APF Inspector General Singha Bahadur Shrestha appraised Thapa of the functioning and achievements of the security agency. Minister Thapa also addressed senior and junior APF officials and directed them to work in interest of the nation and people. “I urge you to deliver your best and develop the APF as a model security agency,” he said. Thapa praised the role of APF in successful holding of all three tiers of elections by maintaining law and order in the country and said the force had established itself as a centre of trust among the people. He also directed the APF officials to act on chain of command and to not get distracted from their sense of duty. Stating that Nepal was heading towards prosperity, Thapa underscored the need for the APF to keep up with its excellent job in areas of border security and disaster management. Minister Thapa also pledged to do all possible to meet the resource requirements of the APF. He directed APF personnel to perform their duties in a manner consistent with the present needs of the nation in a more diligent and effective manner for safeguarding nationality, democracy, sovereignty and the overall interest of the people through mutual harmony, coordination and collaboration among security agencies. APF Chief Shrestha said the organisation was working to develop it as a dependable security agency of the country and informed that it was in need of further capacity development. According to APF, search and rescue operations carried out by the security agency in the aftermath of the April 25, 2015 have made people believe that security personnel are always with them in moments of happiness and sorrow. APF personnel have been mobilised in 56 districts to provide security and are working in coordination with local administration and other stakeholders.
#Armed Police Force #APF #Minister for Home Affairs #Ram Bahadur Thapa
You May Also like: