Isolated Nepal PM could be toppled by constitution crisis 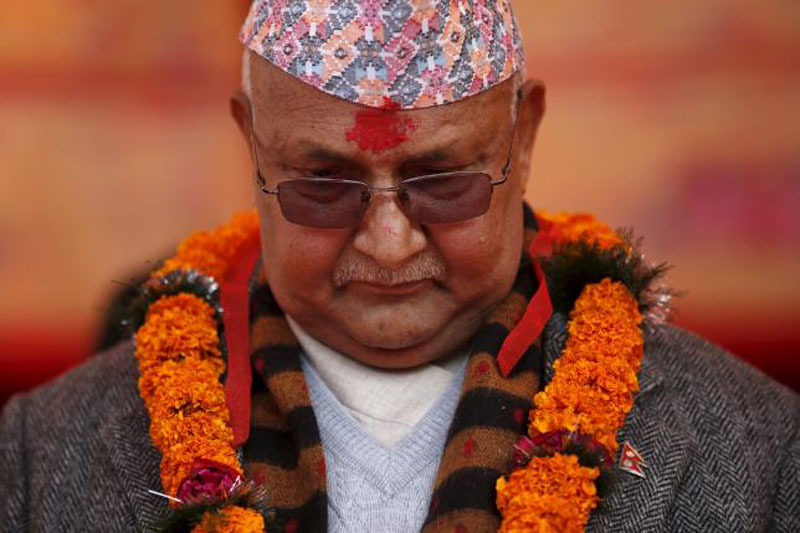 Nepal's Prime Minister Khadga Prasad Sharma Oli, also known as KP Oli, observes a minute of silence for earthquake victims during an event organised to mark the 18th National Earthquake Safety Day and the official launch of earthquake reconstruction efforts in Bungamati. Photo: Reuters
KATHMANDU: An unwieldy coalition of lawmakers trying to implement Nepal's first democratic constitution is finding common cause with protesting minority groups, isolating Prime Minister KP Sharma Oli and increasing the risk his government could fall this spring. Oli, of the leftist Communist Party of Nepal (Unified Marxist-Leninist), promised to resolve simmering tensions in the southern plains and lift a blockade of the Indian border when he was voted in to power almost four months ago. Yet sporadic violence, in which more than 50 people have died since August, continues in the Himalayan nation with police shooting dead three demonstrators last month. Protest leaders say the heavy-handed police tactics show the government is not sincere about finding a solution, while in Kathmandu residents have to choose between queuing for hours for fuel and gas and paying exorbitant prices on the black market. "There are reports that corruption is rising and the government is not able to meet expectations of the people," said Dinanath Sharma, a spokesman for the Maoist party that props up Oli's fragile coalition. Oli, 63, heads a fractious cabinet with no less than six deputy premiers – one a royalist bent on reinstating the monarchy and another the leader of a party representing minority Madhesis who has yet to sign the constitution. Relations with India have deteriorated further since New Delhi tried and failed last September to delay the promulgation of the constitution so that dissenters - many with family ties across the border - could be brought on board. Oli's hostile rhetoric has annoyed New Delhi, said a former diplomat, even as increased cooperation between Indian and Nepali officials has eased the impact of the blockade in recent weeks. India has sympathised with the protest movement, hosting a briefing by Madhesi and other leaders last week, amid talk on the New Delhi cocktail circuit that Oli's days in power may be numbered. "Madhes is a colony of the ruling class. We are living under apartheid," Vijay K. Karna, a Madhesi protest leader, said in New Delhi. He described Oli as "the main problem" in efforts to reach a constitutional compromise. Bishnu Rimal, Oli's political adviser, sees no immediate threat to the government that could last until elections due in 2018. "There is no possibility of the government falling soon or of any other person forming a new one," Rimal told Reuters. CONGRESS AND CHANGING GUARD Following a winter lull, Madhesi leaders are under pressure to revive their campaign for a unified plains province that has hampered efforts to recover from two devastating earthquakes last year. The party to watch is the opposition Nepali Congress, the largest in parliament, which will elect a president at its general convention in March. The party – which has ties to both India and southern Nepal – will then face a choice between joining a government of national unity or attempting to capture power by dislodging Oli, according to a local level Congress leader. Senior Congress leaders contacted by Reuters played down speculation they would oust Oli, although a central committee member said Congress was best placed to mediate between ruling "ultra nationalists" and the protesters. Maoist spokesman Sharma said the party was not considering leaving the coalition yet. "But we'll discuss with the prime minister about our concerns seriously," he said. "He must change his ways."
#corruption #Himalayan nation #demonstrators #blockade #Prime Minister KP Sharma Oli #Indian border #Nepal's first democratic constitution
You May Also like: